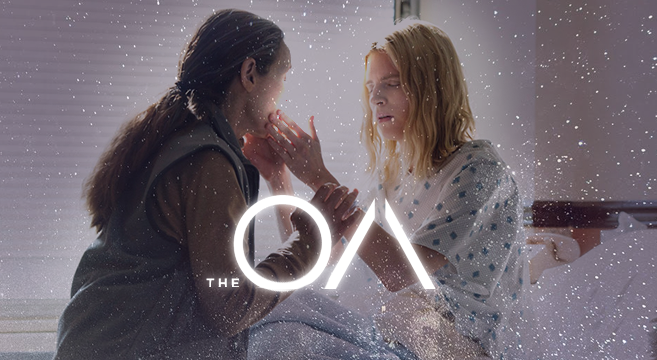 I recently finished all 8 episodes of THE OA on Netflix and was giddy with goosebumps for two reasons. First was because of the incredible journey this series took me on, and second is the fact that a show as surreal and atmospheric as THE OA was even made at all. Like a delicious fusion of the mood of David Lynch‘s Twin Peaks, and the parapsychological subject matter of Stranger Things, THE OA is nothing short of brilliant, cutting-edge television.

Directed by Zal Batmanglij, and co-created, co-written and starring Brit Marling, THE OA tells the impossibly mind-boggling life story of a young woman named Prairie who mysteriously goes missing for seven years. The series begins from the moment she is found, and this is all I can say about the plot without stepping into spoiler territory. Exquisitely filmed by cinematographer Lol Crawley (45 Years), THE OA is nothing short of a visual feast of immaculate minimalistic style. And this strange world is brought to vivid life with exceptional standout performances from Marling, as well as Emory Cohen (Brooklyn), and Phyllis Smith (The Office, Bad Teacher).

But perhaps the most intriguing “character” of all is a set of 5 specific body movements (i.e. the “Five Movements”) used by some of the actors in several very pivotal metaphysical scenes connected to near-death experiences (NDE’s). It wasn’t until after I had finished watching the series that I learned the Five Movements were created by renowned L.A.-based choreographer Ryan Heffington — the genius behind Sia’s choreography, as well as Sigur Ros, Arcade Fire, and Spike Jonze’s recent KENZO short film advertisement (see below). In an interview with Thrillist, Heffington reveals how the Five Movements connected to the larger mythology of THE OA.

“Heffington is quick to point out that many of his recent pieces have strong narrative elements,” writes Dan Jackson of Thrillist. “The megapopular, Grammy-nominated video for Sia’s ‘Chandelier,’ which features former Dance Moms star Maddie Ziegler, blends constant, frantic movement with vivid, emotional storytelling. In fact, his work on Sia’s ‘Elastic Heart,’ which sees the pint-sized Ziegler face off against Shia LaBeouf in a steel cage, feels linked to the dancing in captivity found in THE OA. According to Heffington, the process of creating the movements seen on the show involved many conversations and required sharing common reference points with Marling and Batmanglij. ‘A lot of them were based on natural things,’ he explains. ‘Not all animals — just organic, natural references — whether its ancient tribal dance, or…’ Heffington trails off for a second. ‘I don’t want to give away too much.'” (NOTE: The Thrillist interview continues with a very major spoiler, so be warned if you click on it).

What I admired most about THE OA is its elegant handling of the phenomenon of near-death experiences, and how the show’s creators built such a fascinating world in which to attempt to unravel its mysteries and the nature of consciousness itself. In recent years scientists have been treating NDE’s with the respect they deserve, and are attempting to unlock the complex and powerful experiences these people are having — especially in the area of neurological research. One such example is the astonishing true story of Anita Moorjani who, filled with lemon-size tumors and terminal cancer throughout her body, was given her last rights on her hospital bed when her organs began failing and she fell unconscious, moving closer towards certain death. Her husband and parents said their final goodbyes. Anita’s family and doctors were shocked when she awoke from her coma 30 hours later and tests revealed her cancer was quickly evaporating. Days later her tumors had shrunk to almost nothing, and today she is cancer free. She explains how what she saw and learned during that near-death experience was so powerful and almost beyond description that it was the reason she was able to rid herself of cancer. But this was just the beginning — her story is so much bigger than I could ever put into words myself, so I encourage you to watch her TED Talk below, as well as a preview of her profile by CNN’s Anderson Cooper. You can learn more by visiting AnitaMoorjani.com and AGreenRoadJournal.com.

Discover Magazine also has a terrific article which explains how more and more scientists are researching NDE’s for clues into human consciousness and what might be beyond our known dimension. Amy Paturel writes, “So even though my dad is in his late 70s and usually is too absentminded to remember what he ate for lunch, his NDE is seared in his mind — something called preferential encoding, says Steven Laureys, a neurologist who is chair of the World Federation of Neurology Applied Research Group on Coma and Disorders of Consciousness and director of the Coma Science Group at the University of Liège in Belgium. My dad’s brain recorded every vision, every feeling, every sound, in such detail that the memories seem to color everything in his life.” You can read more at DiscoverMagazine.com.

SEE ALSO: Anita Moorjani’s Near Death Experience Will Change Everything You Thought You Ever Knew About Life
SEE ALSO: Close Encounters Of The Mindblowing Kind: Watch Anita Moorjani’s Account Of Her Near Death Experience
SEE ALSO: Goosebump City: Hear The Mindblowing Hay House Summit Talk With Kyle Gray On The Reality Of Angels
SEE ALSO: Revolutionary Theory Of Biocentrism Unlocks The Mysteries Of Consciousness, The Soul & The Afterlife
.