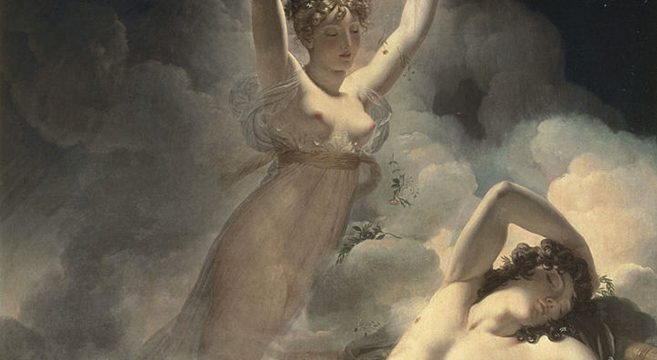 Sex Magic Is Real: How To Cast Powerful Spells With Your Orgasms & Become A Magnet Of Good Fortune

What’s the common thread that links physics, witches, sex, and birthday candle wishes? All of these things eventually involve or connect in some way to energy. Our Universe is built on energy, and that energy comes in the form of positively and negatively-charged particles. For example, each time you make a wish when you blow out your birthday cake candles, what you’re actually doing is harnessing the energy around you and focusing it all towards a single goal and intention. It is the exact same method used by contemporary witches. The Law of Attraction, for instance, is another example of how you can harness the power of the Universe and bend it towards you and have it manifest into a beneficial result. But all these years you’ve been overlooking one of the most powerful and untapped forms of all energy — the orgasm.

In Sex Magic: How to Cast Spells with Your Orgasms, Sophie Saint Thomas writes, “Modern sex magic users have a myriad of historical, cultural practices to draw inspiration from, and many of them emphasize the importance of finding what works best for you. In ways, sex magic is similar to any other form of energy work, which harnesses energy, with the practitioner often tapping into their own spiritual energy to heal. the only difference is that the energy being harnessed in this case is the release of orgasm. ‘The first step is to have a clear goal and an intention of what you want,’ says Luna. ‘I find for me that sex magic works best when your intention has to do with sex, love, confidence, power, strength.’ [Cabral advises against intentions directed towards material things]. ‘Not, I need a new car, I’m gonna masturbate — that’s just so silly,’ [she says]. Other techniques involve repeating mantras during orgasm, focusing on sigils (a magical symbol) to help focus your energy, and invoking certain deities. Hathor, Isis, and Aphrodite are common goddess to invoke, but you can use whatever deity appeals most to you since sex magic is so personalized and intuitional. ‘I think everybody needs to find deities or mythology or archetypes that relate to them. So for some people that’s staying within their own heritage or culture,’ says Cabral. ‘Personally, I love working with Venus or Aphrodite.’ Intuition, she adds, is ‘the most important thing.’ Indeed, most witches will say that sex magic is one of the most intuitive practices. ‘I came to sex magic pretty intuitively,’ recalls Korvett. ‘As a young girl, my mother taught me the power of manifestation, but in a G-rated way, of course. Somehow I made the connection between that and all the self-pleasure I was engaging in, and realized it could be used in a more powerful and productive way.'”

And in their own explanation of the practice, AuntyFlo.com adds, “Firstly, when having sex an enormous amount of energy surrounds the human being. This energy can be released through orgasm and allows for magical tools to be charged or directed to help one’s magic spells. Sex magic is not about making yourself a better lover, giving you many positions on how to orgasm better. Sex magic is all about using one’s body to release the power from within. Sexual energy can be used for many positive attributes. It is not an instant miracle but a tool both to aide and improve your life.  It is not for the fainthearted — it requires discipline and practice. Sex magic is the art of working with the forces of nature to bring about necessary and desired changes. Magic is simply: energy and power of life. It is also about becoming more spiritual (i.e. being in tune with your own deepest goals and desires). It can make you into a money magnet, which we will learn about later.”

The article also elaborates on the deeper meaning and significance of tantra. “Tantra is the beautiful weaving together of all aspects of existence into one whole tapestry of ‘pure love.’ It is the weaving of spirit and sex. It is not, as it commonly labelled in the West, as being solely about sex. It is used in the West as a general term which relates to sexual practice as a spiritual evolutionary practice. Tantra is basically a philosophy of spiritual practice, and does not have a negative connotation. Tantra is an ancient spiritual practice that originates from heaven. It is an ancient practice of combining sexual energy and prayer. It is an esoteric practice of antiquity. It is all about understanding yourself and another, this covers healing, completing, harmony and freedom. Tantra can be part of sex magic but as outlined is much more to do with connecting two lovers. It can be embraced in whole or in part. It is the letting go of all mental, emotional and cultural conditioning that we can suffer that may get in the way of life. Sex magic can also be very useful as an adjunct to such things as divination and astral projection.”

The author goes on to describe a rather explicit 5-step series of instructions and you can read them HERE. And Sophie Saint Thomas explains how sex magic can be performed as a couple or solo. “Even those uninterested or skeptical of practices such as magic can attest to the intimacy and intensity of coming at the same time. ‘With a partner, it becomes really cool and exciting when you can trust someone, and the both of you can work together. You know, staring at each other in the eyes, maybe slowing down an orgasm, breathing together,’ says Cabral. For many practitioners, though, the fact that sex magic can be practiced alone is one of its main draws. ‘Although I’ve experimented with partnered sex magic, I find the solo spells have worked better for me thus far,’ says Korvette. In a world that’s traditionally punished women for freely enjoying both sex and magic, combining the two can feel revolutionary — and taking matters into one’s own hands only heightens that sense.”

And in a feature article for Mic.com, writer Jaya Saxena asked modern witches for deeper insight into the nature of sex magic. “‘Sex can be a powerful form of magic because [sex] changes our consciousness, amplifying our energy and intention,’ Britta, a 28-year-old practicing witch who studies the healing potential of sex, told Mic. Britta first became aware of the potential spiritual aspects of sex through her experiences as a sex worker. ‘From the very beginning, it was apparent that there was a kind of healing that took place when I was holding space for clients, meeting them without judgment, with complete acceptance and presence,’ she said … She connects sex with her practice because ‘they’re both powerful tools for shifting consciousness and require the ego to let go, to surrender to something greater,’ she told Mic.”

Perhaps most importantly, Saxena was given some important sex magic guidelines by the modern witches she spoke with. “Most witches warn — if you are going to explore sex and love through sex magic, there’s one core rule: harm none. ‘The most important moral tenet of magic and spell work is that you do not deny anyone else their freedom. So love spells as many may think of them are a pretty big no-no, Chelsea said. That’s not to say you can’t cast romantic or sexual intentions or spells, just that the target has to be you, not someone else. Chelsea said she uses ‘simple candle magic’ — to put it crudely, a grown-up version of making a wish before you blow out your birthday candles — to cast spells relating to what she wants out of her love and sex life. She lights candles before sex while thinking of a specific goal in mind — having multiple orgasms, for instance, or spiritually connecting with a partner. (Candle magic aside, it also doubles as a good way to set the mood.)”

“Chelsea said she also uses sex magic to harness her own orgasms into fulfilling her personal goals. ‘One of my other favorite things to do is to set an intention, and then at the moment of orgasm direct that energy out to power its fulfillment,’ she said. There’s a whole lot of bodily energy and feeling happening during an orgasm, and the idea is that you can channel that energy into something you want to happen, be it a career goal or sending well wishes to an ailing loved one: ‘You just have to keep your wits about you enough to remember to do it,’ she said.” (Image credit: Aurora and Kephal; 1811, P. Gerain, oil on canvas, Pushkin Museum of Fine Arts Moscow).

Previous post:
Meet The World’s Sexiest Veterinarian From Calabasas Who Can Cure Your Pussy & Tame Your Snake Next Post:
The Power Of Nutritional Psychiatry: How A Trip To The Grocery Store & 72 Hours Can Change Your Life