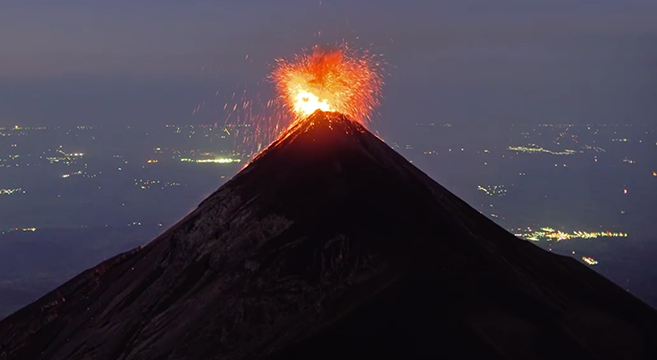 Viewed Over 3.3 Million Times, This Viral Footage Of An Erupting Volcano Is Oddly Soothing

Martin Rietze is one of the world’s top volcano photographers and videographers. His body of work is incredibly impressive (visit Mrietze.com), but it’s his latest footage of Guatemala’s Fuego Volcano that’s captured the attention of the world. Filmed on November 21, 2016, the nearly 4-minute video was quickly uploaded to Newsflare and shows Fuego ramping up to a paroxystic eruption, with strombolian and ash explosions, leading to spectacularly high energy lavafountaining. On November 28, the Weather Network edited the footage down to 44-seconds with 5 different camera angles, and now just one week later the video has been seen more than 3.3 million times. You can watch the 44-second video below, watch the original at Newsflare.com, watch live webcams of the Fuego Volcano HERE, and be sure to watch the trailer for Werner Herzog’s new volcano documentary Into The Inferno below.
.

Previous post:
Parkinson’s Starts & Stops In The Gut, And How Cancer Cells & Their Environment “Talk” To Each Other Next Post:
The Amazing Origin Story Of The President’s Desk & How It Emerged From The Canadian Arctic In 1855