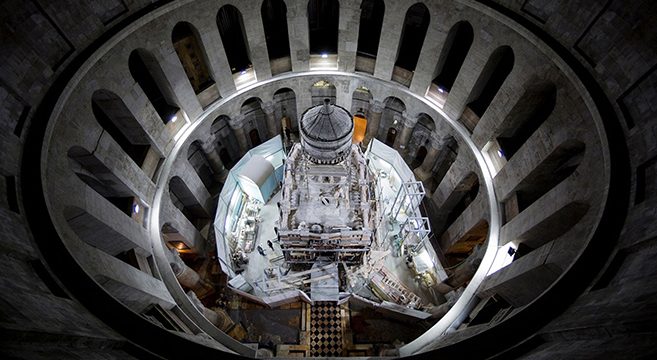 The Church of the Holy Sepulchre in Jerusalem is the only place in the world where six denominations of Christianity practice their faith at the same site. The Church is home to the two holiest sites in Christendom: 1) the site where Jesus of Nazareth was crucified [known as Calvary], and 2) Jesus’s empty tomb — a cave niche carved out of the side of a rock, where his body is said to have been laid before he was crucified. Each of the six denominations is responsible for guarding different locations of the Church’s site, and they all object to even the slightest of renovations. Five decades of disagreement between the six groups (beginning with a 1958 agreement that something needed to be done) had allowed the Church to fall into such disrepair. But when police temporarily shut down the Church last year at the order of Israel’s Antiquities Authority which deemed the building unsafe and very near to collapse, it was enough for the six denominations to give a green light to the badly needed restoration. Work finally began on the restoration this past June.

The Church was originally completed in 335, then destroyed in 1009 and later rebuilt in 1048. The current 11th century building, therefore, sits on a mixture of rubble from the original Church, bedrock of Jesus’s cave tomb which had collapsed onto itself ages ago, and the hill where his cross stood on Calvary. At the center of the Church is the Holy Edicule, the shrine that surrounds the cave tomb of Jesus, and it’s here where most of the structural restoration needs to occur.

Pilgrims wait for hours each day to enter the Edicule and crouch at a marble slab that sits above the cave tomb of Jesus, but on Wednesday these visits were suspended in order for the restoration team to begin their work. The first remarkable discovery came when they removed the iconic marble slab to enter the cave, something which hasn’t happened since 1550. When the slab was taken off, it revealed a previously unknown second grey slab beneath, which has a crack down the middle and an etching of a small cross. But the second and most extraordinary discovery of all came from the use of ground-penetrating radar. The long-held belief that the cave tomb had collapsed centuries ago during the temple’s destruction in 1009 were proven wrong — radar revealed the cave tomb of Jesus was fully intact, and it measures approximately 6-feet in height.

Once experts enter the cave tomb they will meticulously document its interior core and the Holy Rock where the body of Jesus was laid, and afterwards the cave will be tightly sealed and then reinforced. A special new addition will be added to the Edicule as well. A small rectangular window will be cut in one of the Edicule’s marble walls, allowing pilgrims the chance to see the limestone wall of the tomb — something that didn’t exist before the restoration.

As one Catholic antiquities supervisor said while watching the work being done, “What happened here 2,000 years ago completely changed the history of the world. To be able to dig, let’s say, to the rock where the body of Jesus was laid — it’s overwhelming joy.”

The tomb of Jesus Christ has never been photographed and no drawings of it exist. The restoration is being documented by National Geographic for an upcoming documentary and special published issue, and you can get a preview of some of their incredible early photos below.
. 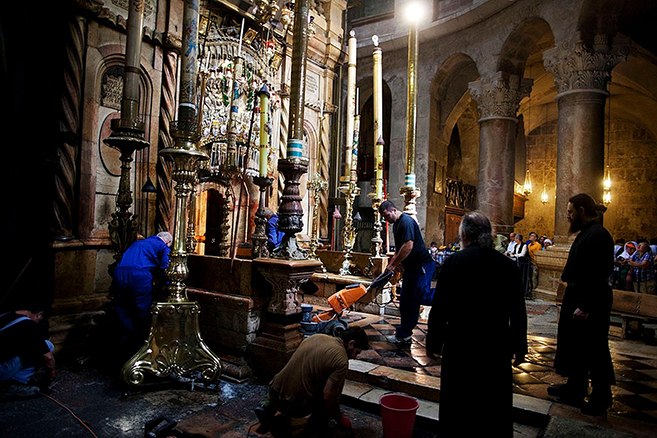 A view of the Edicule built over the stone slab said to be the tomb of Jesus Christ. This structure dates back to 1810, but as conservationists worked to stabilize it in October 2016, they found marble from the 1810 reconstruction over marble from the 1400s and 1100s. These slabs will be stabilized with mortar to preserve the structure permanently (photo and description by National Geographic). 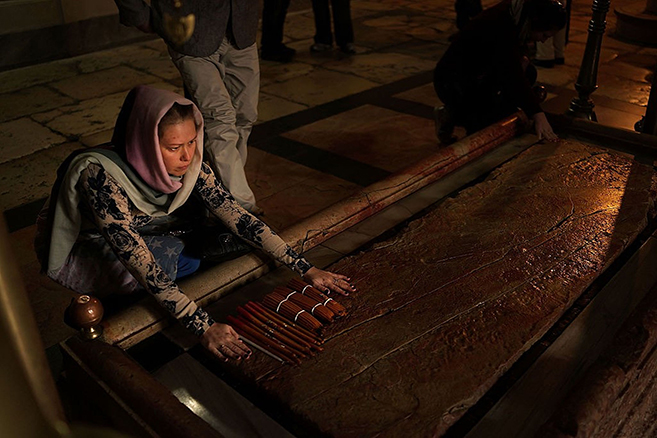 A pilgrim runs her hand across the Stone of Anointing in the Church of the Holy Sepulchre in 2014. This stone is traditionally held to be the spot where Jesus Christ’s body was prepared for burial after crucifixion. Pilgrims have been coming to the church since the fourth century A.D. (photo and description by National Geographic). 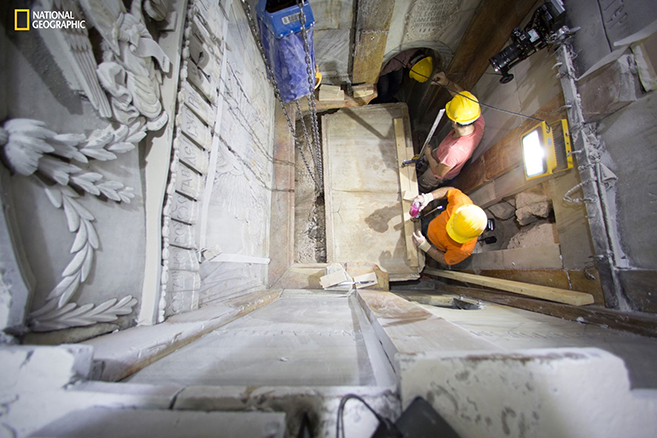 Workers remove a marble slab covering the original stone “burial bed” where Jesus Christ is said to have been laid to rest after being crucified (photo and description by National Geographic). 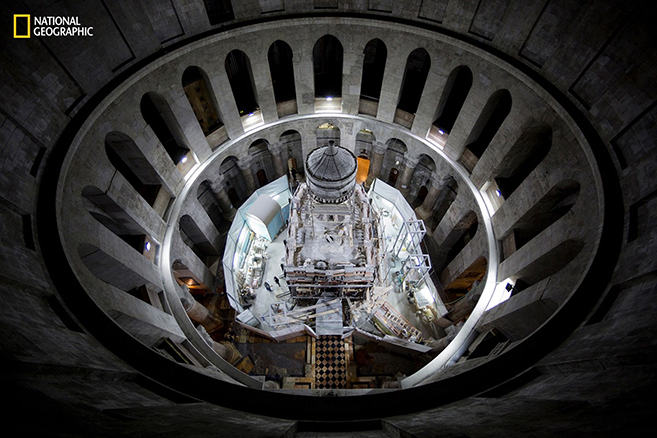 The Holy Edicule, the shrine that surrounds the rock tomb traditionally believed to belong to Jesus Christ, sits within the Church of the Holy Sepulchre in Jerusalem (photo and description by National Geographic). 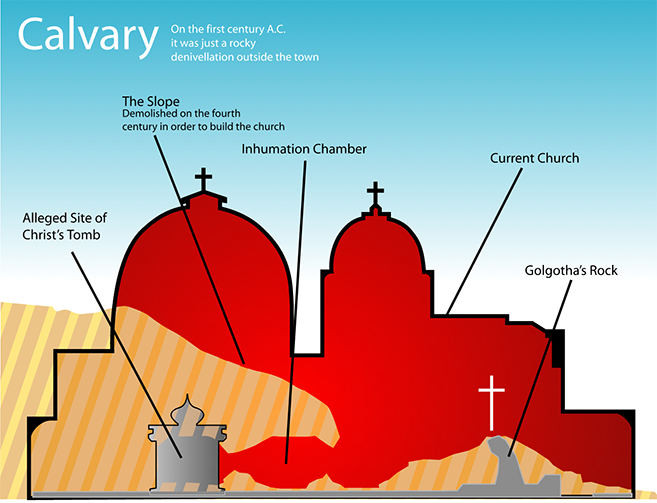 Previous post:
The WOW Files: Something Insane Happens When You Mix Childish Gambino With The Stranger Things Theme Next Post:
Watch Nobel Laureate Eric Kandel Explain How Reductionism Is Used In Art & Science To Unlock Meaning