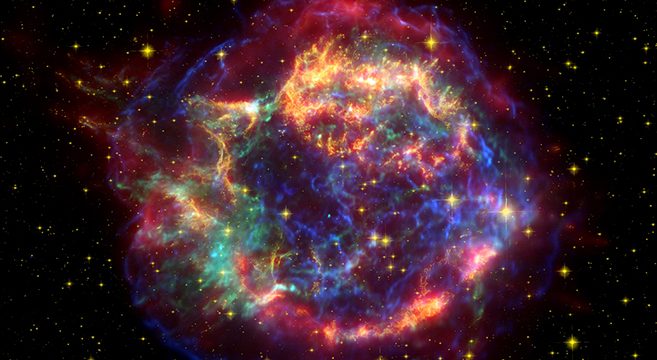 The ashes of a supernova explosion have been detected in fossils found in the depths of the Pacific Ocean. The fossils, created by Earth bacteria, contain iron-60, a unique type of iron found only inside the guts of a supernova explosion, the final phase of a star’s death. During explosions of this kind, the guts of the dying star are flung out into the farthest depths of outer space — sometimes in amounts totalling 5x-10x the volume of our Sun. Charles Q. Choi of Space.com writes, “The scientists discovered that the magnetofossils that contained iron-60 first appeared in the core samples between 2.6 million and 2.8 million years ago. The supernova debris apparently then rained down on Earth for about 800,000 years, with iron-60 levels peaking about 2.2 million years ago. ‘Finding still-live atoms of iron-60 ejected from the guts of a supernova 2.6 million years ago within magnetofossils is awesome,’ said study co-author Shawn Bishop, an experimental nuclear astrophysicist at the Technical University of Munich in Germany. ‘Being able to detect them with the fantastic sensitivity we have — if you give me one atom of iron-60 in 10^16 [10 million billion] stable atoms of iron, we can find it — is awe-inspiring.'” You can learn more at Space.com. (Photo credit: X-ray: NASA/CXC/SAO; Optical: NASA/STScI; Infrared: NASA/JPL-Caltech/Steward/O.Krause et al.)
.

Previous post:
Kayakers In British Columbia Get More Than They Bargained For When Humpbacks Start Bellyflopping Next Post:
Trump Is Laying Foundation For Far-Right Cable News Network With Ailes & Bannon Following Election