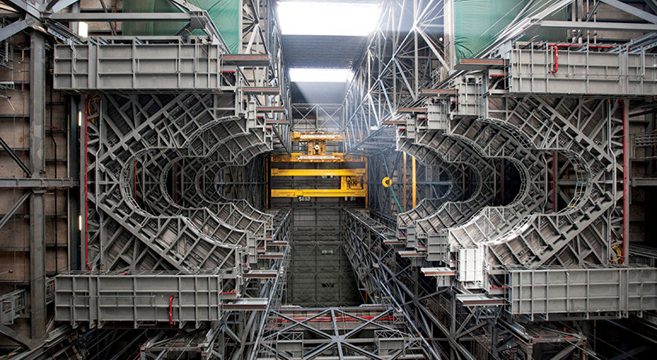 Earlier this year I was working on a movie in Atlanta and one of the local art directors gave me an inside scoop as to why New Orleans has been losing some of its film productions. Turns out, many of New Orleans’ super-sized warehouses and factories that used to be owned by NASA for its space shuttle program — have now been reappropriated by NASA for their epic Mars Mission set to launch in 2018. It takes a lot of construction space to build this amount of spacecraft, and it seems New Orleans is back in the space business once again.

But the epicentre of NASA’s epic spacecraft construction is and always will be Cape Canaveral, Florida. In this stunning photo taken by NASA’s Kim Shiflett, we get a sense of the scale and volume required to build one of these vessels. The photo you are looking at is not a horizontal view — it is looking straight up the Kennedy Space Center’s Vehicle Assembly Building which will soon house the “Space Launch System (SLS) rocket and Orion spacecraft for NASA’s Exploration Mission 1,” writes Harry Pettit of New Scientist, which is “due to launch in 2018. It is one of the largest buildings in the world, covering an area of some 32,000 square metres and boasts more than 3.6 million cubic metres of space inside.”

This week an incredible video has gone viral which demonstrates the sheer force contained inside just one of NASA’s Space Launch System (SLS) rockets. It was filmed using a prototype super high-definition rocket on June 28th in Promontory, Utah. NASA writes, “The HiDyRS-X project originated from a problem that exists when trying to film rocket motor tests. Rocket motor plumes, in addition to being extremely loud, are also extremely bright, making them difficult to record without drastically cutting down the exposure settings on the camera. Doing so, however, darkens the rest of the image, obscuring other important components on the motor.” Looks like that problem has been solved. (Photo credit: Kim Shiflett/NASA)
. 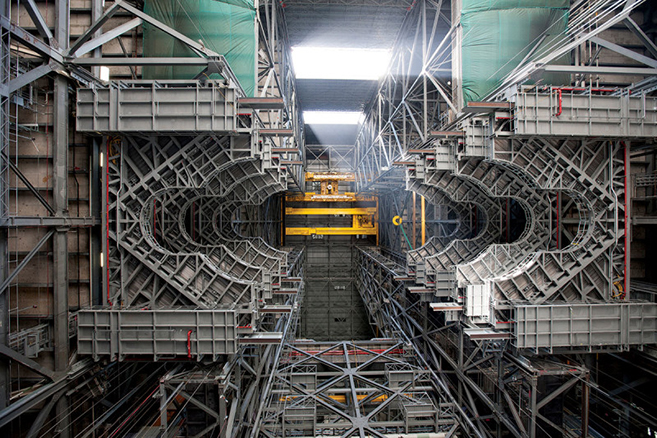