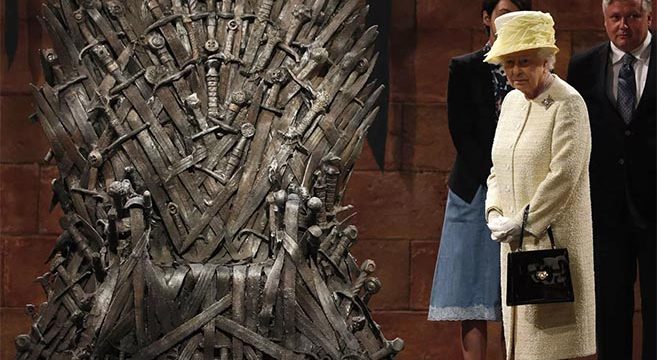 London Falling: Brexit Triggers DEFCON-5 Divorce, E.U. Set To Unleash A Pain On U.K. Unlike Anything

Nasty divorces are excrutiating, but U.K. voters’ deciding to Brexit from the European Union is about to unleash a pain unlike anything a Western country has ever experienced in modern history. In order to prevent a triggering of falling dominoes, the E.U. will need to make an example of the U.K. in the two years ahead — and it is going to be absolutely brutal to watch. This is not a regular nasty divorce — this will go down in history as the DEFCON-5 of all divorces.

Ian Bremmer is President and founder of the global risk consultancy firm Eurasia Group, as well as Editor-at-Large of TIME magazine. He is also considered by The Economist and other leading economic and political intelligencia to be the world’s leading expert on geopolitical risk. So what does he predict will happen to the United Kingdom (now the Un-united Kingdom considering the polarized 50-50 vote) in the wake of the country’s decision to leave? Let’s just say — it will not be pretty. You can watch his prediction in the TIME interview below (NOTE: the interview was recorded before the referendum).

The Brexit emerged out of a perfect storm of 3 disasters. First, was the economic collapse of 2008 which gutted many E.U. economies, requiring massive financial aid and treasure from the U.K., Germany, and France to stop the hemorrhaging in Greece, Spain, Portugal, Italy, etc. Second, after years of instability and ISIS fallout in Syria and Iraq, refugees began to pour into Europe, unleashing a toxic cloud of xenophobia and racist sentiment that reached a boiling point. Third, a dangerous rise in far-right extremism has gripped Europe and much of the world (i.e. Trump, Farage, Le Pen, etc.). When you add these three forces together you get the Brexit.

No matter how you slice it, Britain has decided to leave the European Union and there are zero easy options to choose from. Aside from the brutal economic earthquake this has already triggered, the vote has shed light on a very deeply divided U.K. In many ways the split is as entrenched as the Sunni-Shia divide in the Middle East, which has Karl Sharro of The Atlantic asking, “What if columnists wrote about the U.K. the way they do about the Middle East?” The result is his fascinating analysis entitled Brexit: A Tale of ‘Ancient Ethnic Hatreds’.

CNN Money has also spelled out the nightmare scenario now facing Britain. The big takeaway, writes Charles Riley: “This isn’t a one-day event. The repercussions of the vote to leave are only just beginning, and it has the potential to upend Europe’s established political order. Buckle up!” You can read CNN’s Top 8 Things You Need To Know About The Brexit at CNN.com. (Photo of Queen Elizabeth beside the Iron Throne via TIME, credit: Phil Noble/Reuters)

Previous post:
Most Cited Legal Scholar In U.S. Talks To Charlie About His Book “The World According To Star Wars” Next Post:
Watch Terrence Malick’s Universe Documentary “Voyage Of Time” Narrated By Brad Pitt & Cate Blanchett