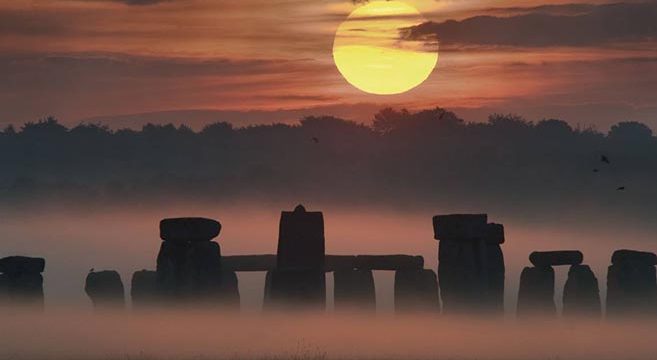 In the world of astrology, today is an exceptionally rare day. For those of us in the northern hemisphere it marks the very first time since 1967’s iconic Summer of Love that we have experienced a Strawberry Moon (i.e. a full Moon falling on the summer solstice). The term Strawberry Moon originates from North American Algonquin natives, who consider June’s full Moon to be the start of the strawberry harvest season. Although the term does not refer to the color of the Moon itself, a Strawberry Moon does appear much more amber-colored than the other Moons. “Having a full moon land smack on the solstice is a truly rare event,” astronomer Bob Mernan of Farmer’s Almanac tells The Telegraph. “By landing exactly on the solstice, this Full Moon doesn’t just rise as the Sun sets but is opposite the Sun in all other ways too. The Sun gets super high so this Moon must be super-low. This forces its light through thicker air, which also tends to be humid this time of year, and the combination typically makes it amber coloured. This is the true Honey Moon.”

The nature of this Strawberry Moon also holds “double light” in that it’s a Sagittarius Moon. Astrologer Chani Nicholas explains: “Monday June 20th brings us both the light from the full moon in Sagittarius (at 7:02am ET) and the shift in light from the sun’s ingress into Cancer (at 6:34pm ET), signalling the summer solstice in the northern hemisphere and the winter solstice in the southern hemisphere. This is the first time since 1967 that we in the north have experienced a full moon on our summer solstice. That was the Summer of Love. May this one be one too. This is the second full moon in a row in Sagittarius. The third of four full moons to happen within a season, this is a blue moon. It happens at the last degree of the sign, at 29 degrees and 33 minutes. It’s on the edge. It puts a double emphasizes not only the house that contains Sagittarius in our personal astrology charts, but also on the themes of Sagittarius for us collectively. Sagittarius is the archer, the rambler, the gambler, the one who bets on hope and runs on faith. Sagittarius moves. Swiftly. Sagittarius seeks. Endlessly. Seeks meaning. Seeks experience. Seeks the horizon. The archer can’t stop for fear of missing out on the next adventure. This is the sign that wants to run with the big questions. The ones that are sure to send us on the most open-ended quests.”

Summer officially kicks off at 6:34pm ET today. The next Strawberry Moon won’t occur again until 46 years from now on June 21, 2062. Ancient Algonquin native Strawberry Moon rituals across North America would have consisted of an all-night dance around a sacred fire, with three rings of women dancing. “The inner circle belonged to the young women who were beginning their Moon cycles, the second row belonged to the child bearers, and the outer circle belonged to the grandmothers. The dance wove them all together in a tapestry that strengthened their community.”

As astrologer Chani Nicholas explains above, this Strawberry Moon is particularly super-charged for its ability to boost personal growth and for laying the foundation of a major quest. If you would like tips on how to harness its full power you can hold your own Strawberry Moon ritual by following the instructions HERE. (Photo credit: Max Alexander, STFC, SPL; via NASA.gov)

YOU CAN WATCH A LIVE STREAM OF THE FULL STRAWBERRY MOON
FROM THE INSTITUTE OF ASTROPHYSICS OBSERVATORY IN THE CANARY ISLANDS HERE:
.