In her latest exhibition, Paperwork & The Will Of Capital (which just completed its run at New York’s Gagosian Gallery, and is currently on display in Moscow), artist Taryn Simon investigates “twin points of departure: archival photographs of official signings; and George Sinclair’s nineteenth century horticultural study containing actual dried grass specimens, an experiment in evolution and survival cited by Charles Darwin in his groundbreaking research.” In an interview with Charlie Rose, Symon reveals: “In this particular project I was looking at historical source images of very significant moments in history … I was taking images from actual signings of agreements, treaties, or accords and decrees that had an economic root. The motivating force behind the signing of these contracts was economic. And looking at the stagecraft that surrounds those agreements and how that is conveyed to a public — what is the ceremony that surrounds it. And in that, I found that there is this repeating pattern of the presence of flowers always sitting amongst these very powerful men.” She says she imagined “the flowers actively listening to the men in the room, and being witnesses to their belief in the their ability to control the evolution of governments and economies and citizens, and nature being positioned as this sort of decorative, dormant element.” You can watch the entire fascinating conversation above. (Image credit: Taryn Simon, Agreement Establishing the International Islamic Trade Finance Corporation. Al-Bayan Palace, 2015)
. 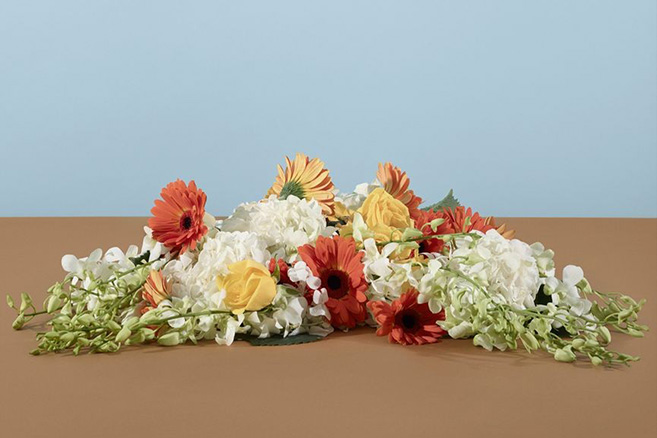 Previous post:
Watch What Happens When You Mix Hypermagnetic Ferrofluid With The Liquid From A Glowstick Next Post:
NOWNESS Profiles The Creative Process Of Lena Dunham’s Father, Artist Carroll Dunham