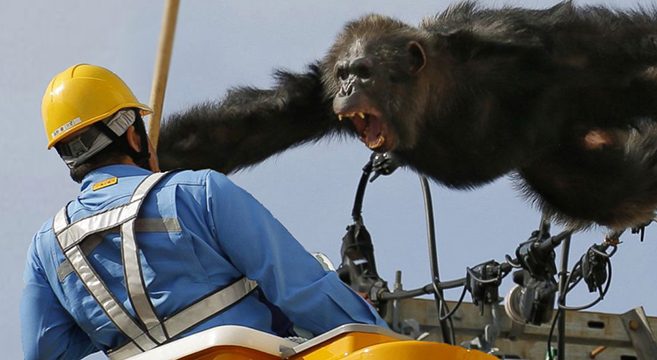 Cha Cha the Chimpanzee managed to escape her cage in the Japanese city of Sendai. The escape resulted in a dramatic 2-hour pursuit as Cha Cha was cha-cha-chased through the city, pursued by officials who eventually tranquilized her as she clung to, then fell from an electricity pole. One of the cha-cha-challenges was how to catch Cha Cha as she fell from above, but luckily she landed safely in a trampoline and zoo officials chu-chu-chucked her back into her cage. Toshikatsu Ouchi, director of Yagiyama Zoological Park, apologized for the incident, and an investigation has been launched by zoo officials.
It’s too soon to tell if any cha-cha-charges will be laid. The news follows a similar story out of New Zealand, where Inky The Octopus somehow suckered her way out of her pool and made her way back to the ocean via a drain. (Sources: ABC News, USA Today)
.