Florence Welch is one of several guest performers on Rufus Wainwright’s upcoming album, Take All My Loves: 9 Shakespeare Sonnets, featuring nine adaptations of Shakespeare sonnets. The eclectic list of other collaborators includes: Helena Bonham Carter, Florence Welch, William Shatner, and Carrie Fisher. The album is set for release on April 22, 2016, and marks the 400th anniversary of Shakespeare’s death. In a press release Wainwright says, “Recording this album has been a marriage made in heaven. It combines my love of classical music with my love of pop music. It’s literally historically fun.” You can hear a clip of Florence Welch’s performance of “When in Disgrace with Fortune and Men’s Eyes” (Sonnet 29) above, and pre-order the album on iTunes.

Shakespeare also caught my attention recently with a story in The Wall Street Journal which profiled Heather Wolfe, who is the manuscripts curator at the Washington, D.C.-based Folger Shakespeare Library. Wolfe’s talent is her rare ability to decipher Shakespeare’s incredibly complex cursive writing — a talent which has led her to some fascinating discoveries which are rewriting the history books on the world’s most famous writer.

“Describing Autolycus, a peddler who tricks people out of money in The Winter’s Tale, Forman concluded: ‘Beware of trusting feigned beggars or fawning felons.’ For more than 80 years, scholars had been mistakenly citing the phrase as ‘fawning fellows,’ repeating a mistranscription that appeared in E.K. Chambers’s William Shakespeare in 1930. (The author had confused an ‘n’ for a ‘u.’) Dr. Wolfe checked with Barbara Mowat and Paul Werstine, editors of the Folger Shakespeare Library editions. They agreed with her reading, which depicts Autolycus as a more malicious character — a felon, rather than a fellow. ‘Because I’m not a Shakespearean, I’m very nervous to say anything new about Shakespeare,’ she said. ‘It’s riding on top of hundreds of years of scholarship. To put yourself out there … feels a bit audacious.'” You can read more about her discoveries at WSJ.com. (Photo credit: Stephen Voss for The Wall Street Journal)
. 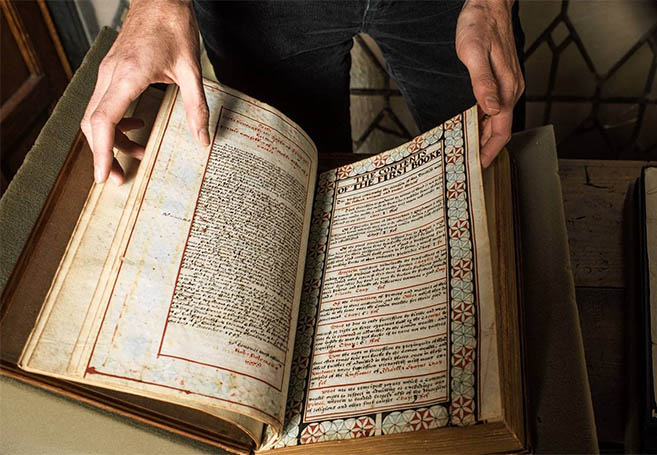