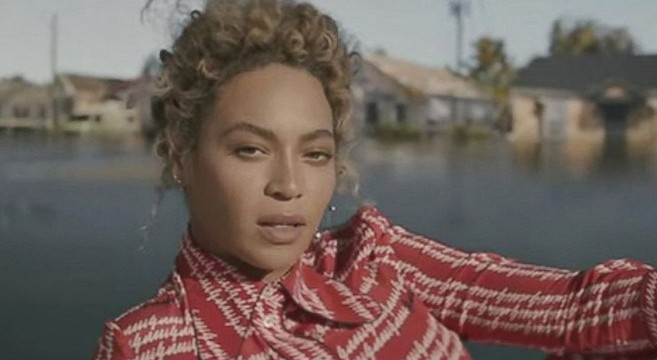 Late on Saturday, February 6th, 2016, Beyoncé released what many are calling the most important video of her entire career. “Formation” is not just another single — it is the most politically charged message the superstar has ever delivered. In his editorial for The Daily Beast entitled “Beyonce’s ‘Formation’: A Fiery Black Power Anthem and Call to Arms,” Kevin Fallon writes, “Dropped a day before Beyoncé was rumored to perform the track at the Super Bowl — and, blessedly, not released exclusively on Tidal — it’s the latest in the new model of music release: Shock your fans into euphoria with the unannounced arrival of new music. With Beyoncé, of course, it’s more like: Stun them into ecclesiastical rapture. ‘Formation’ is a booming meditation on black identity, the validity and transience of a person’s roots and history, and the crushing interplay between power and helplessness, agency, and victimization. Bask in it. Dance to it. Listen to it. But, for the love of god, hear it.”

i-D‘s Wendy Syfret adds, “This week Beyoncé released ‘Formation’ — a track (and video) that spoke to the Black Lives Matter movement, the governmental response to Hurricane Katrina, the politics of black women’s hair, family history, and her own fractured relationship with the American South. You’d be hard pressed to find a pop song that’s said so much in just 4.52 minutes. Before Bey takes her place on top of a submerged cop car — and in music history — we hear a voice ask: ‘What happened at the New Orleans?’ In one line we’re introduced to a central theme in the conversation Beyoncé is about to start, but also to Messy Mya — a YouTube personality who was murdered in 2010.” You can read the full tragic story of Messy Mya by CLICKING HERE and by visiting NOLA.com.

And if you can’t stop obsessing over “Formation” then NPR’s got you covered. Hanna Choi and Leah Donnella of NPR write, “When the video dropped on Saturday, we galvanized. Cleared our schedules, watched on repeat till our eyes turned red. Got into screaming matches with loved ones about what kind of hot sauce belongs in a #swagbag. Even made preemptive Valentine’s Day reservations at Red Lobster, because you never know [sales at Red Lobster have spike 33% since the video’s premiere]. Then came Sunday’s performance. You thought the Broncos won the Super Bowl? Not so much. Beyoncé stepped onto the field and annihilated, and we were all left in the wreckage, paper fans limply hanging from our wrists, trying to make sense of it all. Now it’s Day 3 of this post-‘Formation’ world, and it’s time to dust ourselves off, sort through the emotional rubble, and begin the rebuilding process. We’ve fired up Tweetdeck, blinked to let our eyes readjust, and stepped gingerly into the information phase. It’s time for links. To begin with, we wanted to better understand why this video feels so important. What is it, precisely, that makes these visuals so compelling, so urgent, so politically now?” Read the full scoop at NPR.

Previous post:
The James Webb Telescope Is One Major Step Closer To Getting Into Orbit & Blowing Our Minds Next Post:
Watch Charlie Rose’s Fascinating Hour Special On The Neurobiology Of Parenting & Parental Behavior