A group of tourists in Costa Rica were given the experience of a lifetime when during a boat ride they encountered a massive “superpod” of dolphins swimming alongside them. Numbering in thousands, the superpod was so huge it was impossible to see where the pod ended and where it began. Superpods are incredibly rare, and are the result of either abundant food in the area, or pure spontaneity on the part of the dolphins. Apart from the beauty of the moment that was captured, dolphins have long since been fascinating from a metaphysical perspective as well. Now new research in dolphin behavior is pointing to the very real possibility that dolphins share a collective consciousness. Their limbic system, which is fundamental in the control of emotions, is much larger than humans. And many cases have been reported of dolphins travelling for miles to come to the rescue of swimmers in danger. Susan Casey (former Managing Editor of O Magazine) is the author of the book Voices In The Ocean, and she explains more: “[Over 50 million of years of evolution] their paralimbic area grew huge, so densely jammed with neurons that it blurped out an extra lobe. There’s a jubilee of tissue packed into this area, an exuberance of grey matter that scientists believe relates to all things feeling — and no other mammal has anything quite like it.” You can get your own copy of Susan Casey’s book on Amazon, read its excellent review in The New York Times, read more about the research HERE, and watch her interview below. 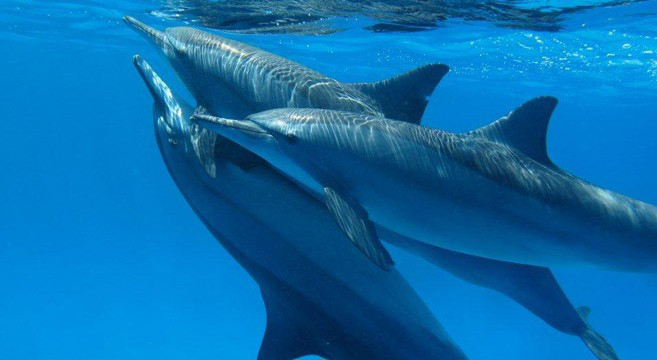