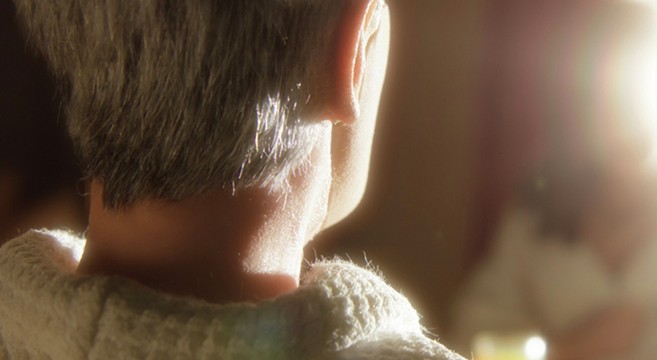 On September 12, 2015 Charlie Kaufman‘s profound ★★★★★ stop-motion sex drama masterpiece, Anomalisa, took home the coveted Grand Jury Prize at the Venice Film Festival. The explosive bow elicited a fresh new wave of glowing reviews, building on the momentum from the film’s world premiere at Telluride a couple of weeks prior. By all accounts from critics and audience members who have seen Anomalisa, the film is a towering achievement in all regards. “What comes from this is plainly one of the best movie scenes of the year, one of the best love scenes of all time, and a sequence of intimate moments more real and beautiful than a silly film review could relate,” writes critic Darren Ruecker of We Got This Covered following Anomalisa‘s TIFF premiere this weekend. “It’s one of those rare instances of cinema where it feels like something simple yet profound about real life is being captured and represented in front of you. And then you realize it’s being done by little dolls made of felt, and it’s made that much more powerful.”

Tim Grierson of PASTE was also in attendance at the film’s TIFF premiere, writing: “[What] is clear at this point is that it’s piercingly poignant — perhaps his most succinct expression of the malaise that’s forever haunting his work. Anomalisa doesn’t resolve the issues that have eaten at his characters since his first published screenplay, 1999’s Being John Malkovich, but the honesty with which he depicts those struggles remain startling, even comforting. This movie is life-affirming, not because of any artificial feel-good sentiment, but because it mirrors one’s own mixed feelings about the wonders and horrors of being alive. Plus, it’s really funny.”

In her review for The Guardian, Catherine Shoard writes: “[Anomalisa] innovates with stop-motion in ways your brain struggles to compute. Kaufman and co-director Duke Johnson offer images so moving and yet also so filthy Anomalisa might just make the first R-rated best animation Oscar winner. And it addresses in new and fruitful ways the kinds of questions cinema sometimes aspires to answer. What does love look like? How does it feel to be deeply disconnected from the rest of the race? And, to quote its hero: ‘What is it to be human? To ache?'”

Sarah Kurchak of Consequence of Sound writes: “[Anomalisa is] also infinitely more human. They might be animated figures, but Michael and Lisa struggle to negotiate their desires and insecurities. They weigh their humble hopes against lifetimes of disappointment, and do so in a way that is incredibly real. Like every other scene in the film, it’s infused with melancholy, but it’s also surprisingly sweet. It can be easy to react to life’s inherent sadness with anger or escapism. And it can be devilishly fun to respond with dark, cynical humor. With Anomalisa, Kaufman makes the case for a kinder and gentler treatment, and he might be on to something. The unflinching realization that we are all alone in this indifferent world has never hurt quite so good.”

Matt Patches of Esquire concludes his review with the following: “Michael is Kaufman’s universal man, pent-up and privileged, without being nefarious. He’s unable to decipher his own desires while still intensely craving. He adores beauty and intellect, but for all the wrong reasons. He’s at once ambitious and facile. He’s a guy anyone could easily become, making Anomalisa the most human film of the year. And it doesn’t star a single human.”

And in his review for HitFix, Drew McWeeny says, “Anomalisa changed my life,” and describes the film as “The most shattering experiment yet from Charlie Kaufman … Sitting in the Princess of Wales Theater in Toronto, it was about halfway through Anomalisa when I realized I was having one of those experiences, that the film was drilling a hole directly into my brain, and that I was not going to be able to shake it when the lights came up. I should have expected something might happen. After all, this is the latest movie from Charlie Kaufman, and he’s been doing this to me since 1999.”

Anomalisa was recently purchased by Paramount, and is set for release in North America in December 2015. The film was partially funded on Kickstarter, and quickly became the fundraising site’s most successful crowdfunding experiment of all time when it was launched in 2012. You can follow Anomalisa on Facebook and visit its original Kickstarter page. The film was co-directed by Duke Johnson.

Previous post:
Watch Scott Dinsmore Explain How To Find Work You Love & Not Be Part Of The 80% Who Hate Their Jobs Next Post:
MIT’s Cutting Edge Technology Is Creating “Nervous Systems” For Cities, Cutting C02 By 100X, & More