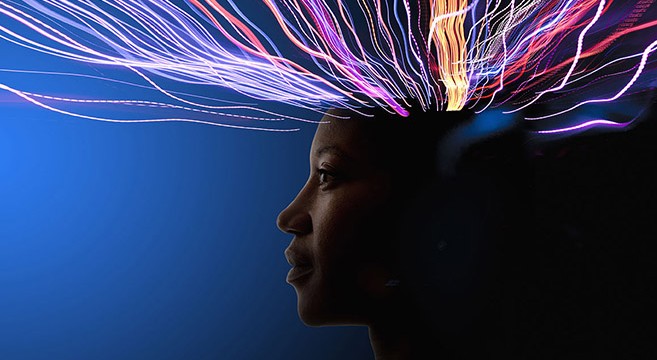 Neuroscientists at Duke University have introduced a new paradigm for brain-machine interfaces that investigates how the brains of two or more animals (either monkeys or rats) can be networked to work together as part of a single
computational system to perform motor tasks (in the case of monkeys) or simple computations (multiple rat brains). These functional networks of animal brains have been named Brainets by the authors of the studies. In the two Brainet examples reported in the July 9th, 2015 issue of Scientific Reports, groups of animals were able to literally merge their collective brain activity together to either control the movements of a virtual avatar arm in three dimensions to reach a target (monkey Brainet), or to perform a variety of computational operations (rat Brainet), including pattern recognition, storage and retrieval of sensory information and even weather forecasting. These latter examples suggest that animal Brainets could serve as the core of organic computers that employ a hybrid digital-analog computational architecture.

Brain-machine interfaces (BMIs) are computational systems that allow subjects to use their brain signals to directly control the movements of artificial devices, such as robotic arms, exoskeletons or virtual avatars. The Duke researchers, working at the Center for Neuroengineering, and led by Miguel Nicolelis (see TED Talk below), have previously built BMIs to capture and transmit the brain signals of individual rats, monkeys, and even human subjects to artificial devices. In the first of the studies published this week, the scientists linked two or three rhesus macaque monkeys in a network that they named Brainet. They used this Brainet to investigate the physiological properties and adaptability of brain circuits when the animals worked together just by combining their collective brain activity.

The rhesus monkeys were outfitted with arrays implanted in their motor and somatosensory cortices to capture and transmit their brain activity. For one experiment highlighted in the article, two monkeys were placed in separate rooms where they observed identical images of an avatar on a display monitor in front of them. One animal controlled the avatar’s horizontal movement along an x-axis, and the other controlled vertical movements along a y-axis. The monkeys worked together to move the avatar on the screen to touch a moving target.

In an interview with New Scientist, Andrea Stocco of the University of Washington in Seattle (who was not involved in the project) says, “This is incredible. We are sampling different neurons from different animals and putting them together to create a superorganism.” Stocco also points out the enormous possibilities this opens up when human Brainets are created. “Once brains are connected, applications become just a matter of what different animals can do,” Stocco tells New Scientist. Monkeys are capable of little more than moving an avatar, but human Brainets could allow us to do away with language altogether. Language, after all, is merely “cumbersome and difficult-to-manage symbolic code,” Stucco says. A connected network of human brains could move beyond language entirely, and enter a much higher level of sophisticated communication where complex abstract ideas could be tackled and solved.

No one is under any assumption that a human Brainet wouldn’t be without its flaws — privacy, for example being one of the most concerning drawbacks. But akin to stem cell research, human Brainet technology would have unlimited possibilities. (Image credit John Lund/Getty via New Scientist)