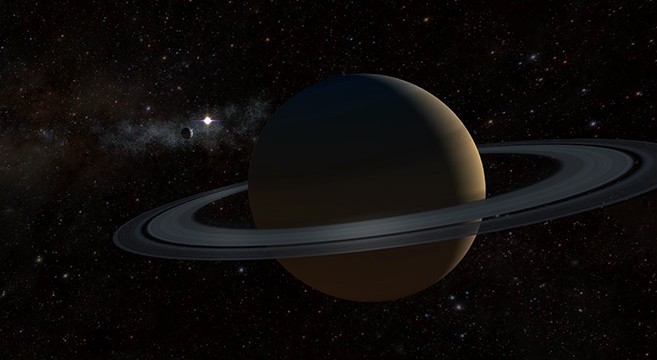 Prepare yourself for a very special cosmic online adventure. Taking inspiration from the opening scene of Contact (1997), a team of web designers have built an interactive site which tracks how far the radio waves of many of Earth’s #1 pop hits have travelled since the moment they were each released. For instance, because Pluto is only 5 light-hours away from Earth, the New Horizons spacecraft (which just arrived there yesterday) would be listening to Taylor Swift’s “Bad Blood” — still relatively fresh music. But Billy Murray’s hit “The Grand Old Rag” from 1906 — one of the first songs ever played on radio — has travelled a whopping 109 light-years from Earth. To take the fascinating voyage on your own visit LightYear.fm and you can use your mouse to scroll in or out (i.e. return to Earth or go further away) to scan the cosmos. You can also use the handy light-year ruler on the left of your screen for quicker jumps through time.

SEE ALSO: The WOW Files: Listen To LIVE Boston Police Radio Mixed With Ambient Electronic Music Score
SEE ALSO: Prepare Yourself: Press Play And Listen To The Sound Of The Big Bang And The Birth Of The Universe

Previous post:
Watch The World’s First Groundbreaking Microscopic 3D Heart Made From Stem Cells Beating Away Next Post:
Watch Charlie Rose’s Terrific Analysis Of Why The Iran Deal Is A Towering Achievement In Diplomacy