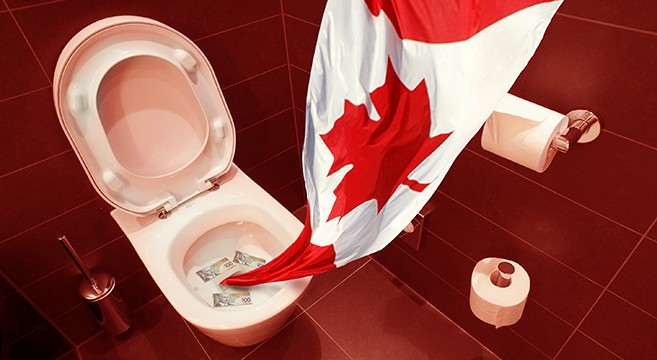 Canada’s Economy Has Officially Imploded Under Harper, Will Collapse Even Further With New Iran Deal

President Obama announced at 7am EST this morning that the P5 + 1 (United States, the United Kingdom, France, China, Russia and Germany — along with the European Union) had successfully achieved a long-term comprehensive nuclear deal with Iran that will verifiably prevent Iran from acquiring a nuclear weapon and ensure that Iran’s nuclear program will be exclusively peaceful going forward. Not only will the deal release crippling sanctions on Iran, it will also open up a massive new oil market to the world, and effectively deal a sucker punch blow straight to the gut of the Canadian economy, which is already officially tanking.

Ever since becoming Prime Minister in 2006, Stephen Harper has worked tirelessly to shore-up the Canadian economy around the Alberta tar sands and the “dirty oil” industry. The strategy has failed miserably, as Canada’s economy is officially entering one major step closer towards full-blown recession. The buzz word “atrocious” is now synonymous with the country’s economy, now that Harper has welded a crippling oil-drenched albatross directly to Canada’s GDP.

Norman Mogil of Business Insider explains: “The Canadian economy is no longer the darling of the G7, now that it is experiencing recessionary conditions. To avoid the technical measure of a recession, the economy needs to record increases of 0.2% and 0.3% in May and June, respectively — a tall order given the performance to date. Analysts are whispering among themselves on the probability of a full recession by the end of the summer.”

Emanuella Enenajor of Bank of America Merrill Lynch said she expects that the economic downturn will ravage the Canadian dollar — tumbling it down to 77 cents U.S. by the end of 2015, the lowest level in more than ten years. “The economy has surprised to the downside this year, and appears to have entered a recession in (the first half of) 2015, even after policy easing in January,” she said in a note to clients.

Bloomberg News adds: “‘If the doctor says you need surgery to avoid death, the side effects usually don’t deter you, you just go ahead and manage them somehow,’ Bank of Canada Governor Stephen Poloz said during a panel talk at the Bank for International Settlements. The April GDP decline was a surprise to all 20 economists in a Bloomberg survey and countered the Bank of Canada’s view that the damage from lower oil was probably ‘front-loaded.'”

Not only has Harper’s government ruined the Canadian economy, it is also busy violating the privacy and human rights of its citizens with its draconian Bill C-51 mass surveillance program. The violation is so severe that a United Nations committee is currently investigating the situation, and expected to publish its report on July 23rd.

Meanwhile, the Prime Minister’s Office has also been busy banning reporters and journalists from Harper’s public events as the country approaches the federal election in October 2015. Justin Ling of VICE NEWS writes: “The phrase ‘photo opportunity only (cameras and photographers only)’ appears 90 times in my inbox. All 90 emails are from the Prime Minister’s Office regarding upcoming events with Stephen Harper. That line means that if ever an enterprising print, online, television, or radio journalist were to dare enter the event, security would prevent them and, if need be, remove them from the premises. I know, because I’ve tried.” You can read the full story at VICE.com.