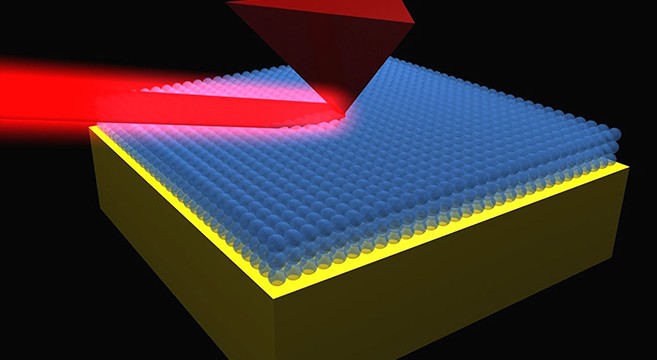 Scientists have known for decades that infrared light has a powerful healing effect on cells by boosting each cell’s energy supply (the light causes the cell’s mitochondria — the engine inside each cell — to pump out more ATP, which is the fuel itself). But the mechanics of why this is so have remained a mystery — until now. Dr. Andrei Sommer of the University of Ulm in Germany spearheaded the research which recently revealed the elusive cause of infrared light’s healing properties.

Scientists used to think the boost was caused by infrared light’s effect on the respiration enzyme, cytochrome C, but we have since learned that the enzyme cannot even absorb the light at the right frequency. Sommer’s team have now traced the reaction to the water inside the cell. In normal conditions the water inside each cell has a high surface tension (similar in large-scale to molasses). But when infrared light is shone on the water it increases the distance between the water molecules, thereby making the water much runnier. To measure the change in water tension due to infrared light exposure, the researchers used a nanoscopic diamond probe separated by a thin sheet of water with a metal plate below (see image above). When the water beneath the diamond probe’s tip was exposed to an infrared laser it reduced the water tension by 72% allowing the probe to pass through to the plate.

Researchers are now investigating how this phenomenon can help speed up the healing of skin wounds and burns to the eye, reduce pain and inflammation beneath the skin’s surface, reverse Parkinson’s disease by shining infrared light directly into the brain, as well as working wonders in IVF fertility treatments. Low quality sperm cells in IVF labs, for example, often have trouble swimming to find the egg — even though the egg is barely 1-millimetre away. In previous research, sperm treated with caffeine have proven effective, but the caffeine is toxic and therefore unusable for treatment. Researchers are now embarking on research to determine if sperm treated with infrared light prior to fertilization will be better able to find the egg. (Image by Andrei Sommer et al via New Scientist)