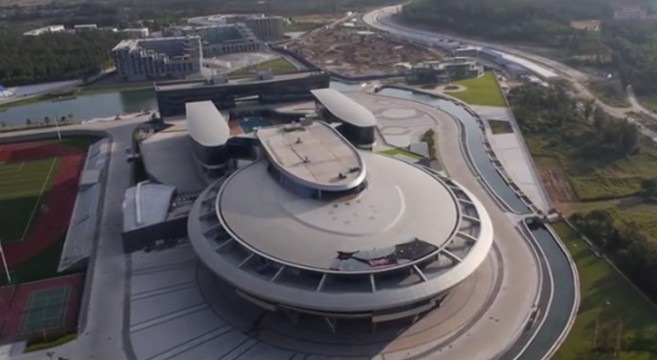 When I was a kid I was so obsessed with Star Trek: The Next Generation that I used to pretend the wrap-around deck of my house was one of the corridors from the U.S.S. Enterprise. Back and forth, back and forth I would walk, making up all sorts of Trekalicious dialogue, and forcing my cousin to be my right-hand man Commander. But that’s nothing compared to what one Chinese tycoon just built in the city of Changle, in China’s Fujian province.

A diehard Trekkie, Liu Dejian is the founder of NetDragon Websoft, a Chinese online games developer, and he’s also on the board of web giant Baidu. Dejian spent $97 million to build his company’s headquarters which is shaped like the USS Enterprise NCC-1701-E, as seen in the movies Star Trek: First Contact, Star Trek: Insurrection and Star Trek Nemesis.

The 6-storey building is 260 meters long and 100 meters wide, took 4 years to complete, and opened one year ago. A representative with the company’s legal department says when they initially contacted CBS to obtain permission to begin construction, CBS officials initially thought the project was a hoax. It wasn’t until Dejian’s team filled out the paperwork that CBS lawyers realized the project was indeed very real. It’s unclear how much NetDragon had to pay CBS for the rights to build the Enterprise-inspired headquarters.