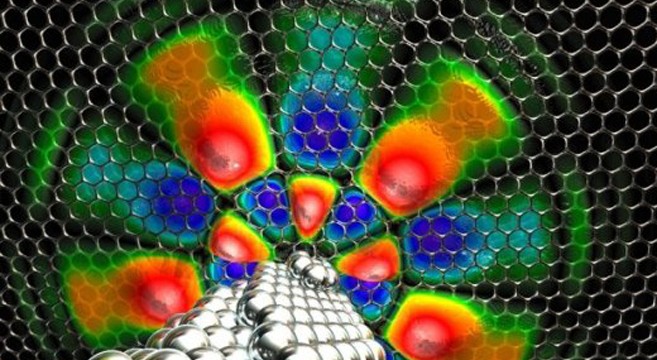 As if electron microscopes weren’t already mindblowing enough — now scientists have made a massive breakthrough in “whispering gallery” research which has opened the door towards quantum-based electronic optics. Science Daily writes: “Because the new system is based on well-established STM (Scanning Tunneling Miscroscopy) technology, it could be developed relatively quickly into usable devices, Levitov suggests.”

“And conveniently, the STM not only creates the whispering gallery effect, but also provides a means of observing the results, to study the phenomenon. ‘The tip does double-duty in this case,’ he says. This could be a step toward the creation of electronic lenses, Levitov says — ‘a concept that intrigues graphene researchers.’ In principle, these could provide a way of observing objects one-thousandth the size of those visible using light waves.”

The breakthrough was published in the journal Science on May 8, 2015, and is co-authored by MIT professor of physics Leonid Levitov and researchers at the National Institute of Standards and Technology (NIST), the University of Maryland, Imperial College London, and the National Institute for Materials Science (NIMS) in Tsukuba, Japan. You can read the full story by visiting MIT News and ScienceDaily.com. (Image courtesy of Jon Wyrick/NIST)