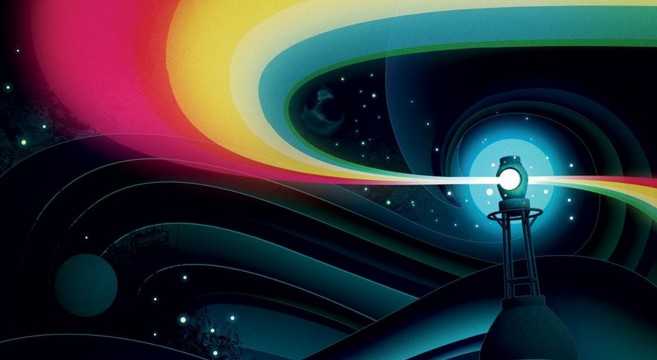 The Large Hadron Collider made physics history by proving the existence of the God particle, and if you think they’re done with out-of-this-world experiments — think again. Next up, the LHC research team plan on using their groundbreaking machine to literally touch another dimension by testing out the relatively recent Rainbow Gravity Theory.

Rafi Schwartz of GOOD writes: “[The Rainbow Gravity Theory] claims the universe was not brought into being through a singular Big Bang event, but rather has existed forever, without a fixed starting point. The theory postulates that each of light’s different wavelengths have their own, unique interactions with gravity, the effects of which can’t be felt on a large, planetary scale, but which may be detectable on the subatomic level.”

And Paul Baldwin of Express writes: “Mir Faizal, one of the three-strong team of physicists behind the experiment, said: ‘Just as many parallel sheets of paper, which are two dimensional objects [breadth and length] can exist in a third dimension [height], parallel universes can also exist in higher dimensions. We predict that gravity can leak into extra dimensions, and if it does, then miniature black holes can be produced at the LHC. Normally, when people think of the multiverse, they think of the many-worlds interpretation of quantum mechanics, where every possibility is actualised. This cannot be tested and so it is philosophy and not science. This is not what we mean by parallel universes. What we mean is real universes in extra dimensions.” (Image courtesy of New Scientist on Facebook).

UPDATE: CERN HAS CONFIRMED THEY ACCIDENTALLY CREATED A “RAINBOW UNIVERSE” WHILE THEY WERE WARMING UP THE LHC ON ON MARCH 21st. READ MORE AT NOVA.


Previous post:
A Fascinating Exploration Of “Alcohol: The Most Astonishing Molecule” And How It Shaped Civilization Next Post:
Check Out Jamie XX’s Brilliant New Single “Loud Places” Off His Highly Anticipated Album “In Colour”