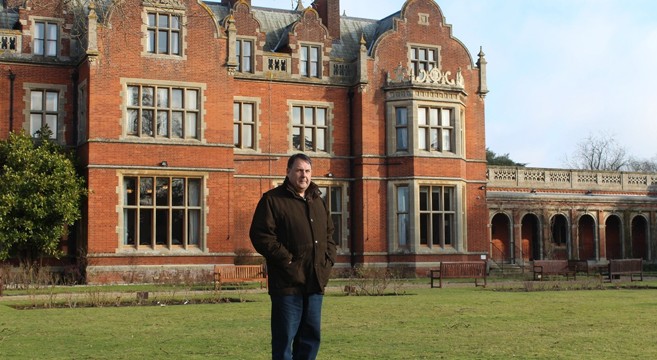 The Wall Street Journal‘s Matthew Dalton recently paid a visit to Arthur Findlay College, a school 40 miles outside of London which has been offering courses for practicing psychics and mediums for the past half century. The school itself is housed in a stunning Victorian mansion, and is named in honor of the businessman who donated the estate, and is run by members of the Spiritualist movement which first began in the United States in the 1840s. The Spiritualist movement has followers and churches worldwide, and is based on the shared belief that the human spirit survives and evolves after death, and that the spiritual beings residing on this dimensional plane are far more enlightened than human beings — and they want to communicate their wisdom from the other side.

Dalton writes: “[AFC’s] instructors believe the powers of a psychic aren’t just gifts from the gods. ‘Mediumship is a skill that can be acquired like many skills,’ says Steven Upton, an instructor and spokesman for the college. Over the years, he says courses have increasingly been taught by professional psychics, who help students cope with stresses of the job, such as fear of public speaking to the dead. Psychics report demand for their services has grown as people turn away from established religions and psychologists for counsel … ‘Ultimately psychologists are going to listen to you more than give guidance,’ says Tamara Trusseau, who has a television show and runs an online network of psychics. ‘A lot of people get really fed up with that.’ ”

You can read the full profile of Arthur Findlay College by visiting The Wall Street Journal, and to learn more about the fascinating school and how you can take a course you can visit ArthurFindlayCollege.org. If you are unable to take a course at AFC you can also try honing your skills as a psychic medium by reading the excellent book The Mentalist’s Handbook: An Explorer’s Guide To Astral, Spirit & Psychic Worlds. The book is a brilliant resource filled with terrific exercises you can use to help you perfect your Jedi-like psychic skills and masterful use of The Force for the rest of your life.

Similarly, it was exactly one year ago when I was telling you about a similar institute — the Division of Perceptual Studies (DOPS) at the University of Virginia’s School of Medicine. Founded in 1967 by Dr. Ian Stevenson, its mission is “the scientific empirical investigation of phenomena that suggest that currently accepted scientific assumptions and theories about the nature of mind or consciousness, and its relation to matter, may be incomplete.” The brilliant research teams at DOPS have conducted thousands of research studies into cases that involve: ESP, poltergeists, near-death experiences, out-of-body experiences, claimed memories of past lives, and more. Scientific American went inside the DOPS paranormal lab and they published a fascinating profile which you can read in full here: Inside The Godhead X-FILES: The Univ. Of Virginia Has A Prestigious Paranormal Lab Just Like X-MEN. (Photo by Matthew Dalton, The Wall Street Journal).