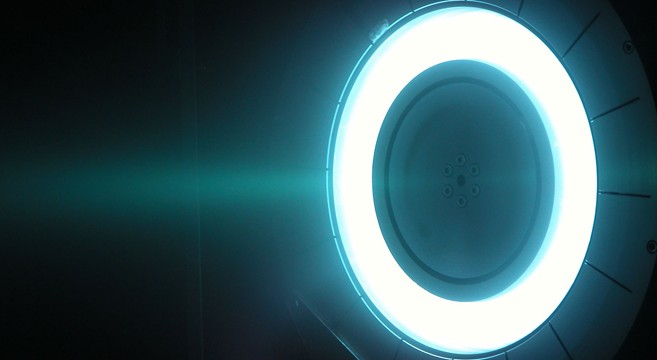 Eight years after its launch, and four years after visiting Vesta (the 2nd largest object in our galaxy’s asteroid belt), NASA’s Dawn spacecraft is set to arrive at the dwarf planet Ceres, the largest object in the asteroid belt, in early March 2015. It’s the only spacecraft in history to orbit two alien protoplanets in a single mission. The incredible mission is made possible by NASA’s sophisticated ion engines which use a fraction of the fuel its traditional engines used to use. What’s more, NASA’s ion engine technology is poised to revolutionize the future of space exploration.

Popular Science writes: “That achievement is made possible by its ion engines, which are about one foot in diameter. Inside each engine, xenon atoms are bombarded with electrons to form ions. Metal grids at the back of each engine are charged to about 1,000 volts and shoot out the ions at up to 90,000 miles per hour. The thrust is minuscule. (To approximate the pressure the engines exert on Dawn, take a sheet of paper and place on it on your palm. That’s it!) But in a zero-gravity, frictionless environment, the effect of this thrust gradually builds up. At its fastest, Dawn can move at about 24,000 miles per hour. And because the ions move at such a high velocity, the engines need less propellant, making them 10 times more efficient than conventional chemical fuels. Ion propulsion ‘is taking over the industry,’ says John Brophy, who developed Dawn’s engine.”

To learn more about NASA’s ion engines — as well as how and why the engines are allowing for what’s being called space exploration “off-roading” — be sure to visit PopularScience.com. And to enter the world of NASA’s Dawn spacecraft be sure to visit NASA’s Dawn. (Photo courtesy of WIRED).