This past June, Hunter Gandee walked 40 miles while carrying his brother, Braden, on his back to raise awareness for cerebral palsy. Their heartwarming story of brotherly love was then profiled on NBC Nightly News, where it quickly became one of the broadcast’s most talked about and inspirational stories in the show’s history. Last night NBC revisited the Gandee brothers in their small home town in Michigan to see how they’re doing, and needless to say, my heart had melted into a puddle before the segment was even over. Hunter is now a 15-year-old freshman at Bedford High School, and in the months since he and his brother’s big walk in June, he’s been helping Braden (now 8) explore his love of sports — especially wrestling. “People think ‘oh he has a disability, so he can’t really do much,'” Braden said. “If you put your mind to it, and try hard enough, maybe you can actually do it.” The brothers are also busy raising funds to build an inclusive playground at Braden’s school — Douglas Road Elementary. If all goes well they’ll have the $350,000 they need by spring. I have a feeling that won’t be a problem. You can support their efforts by donating to the Braden brothers’ fundraiser The Cerebral Palsy Swagger at CPSwag.blog.com. (Photo credit: Chris Asadian). 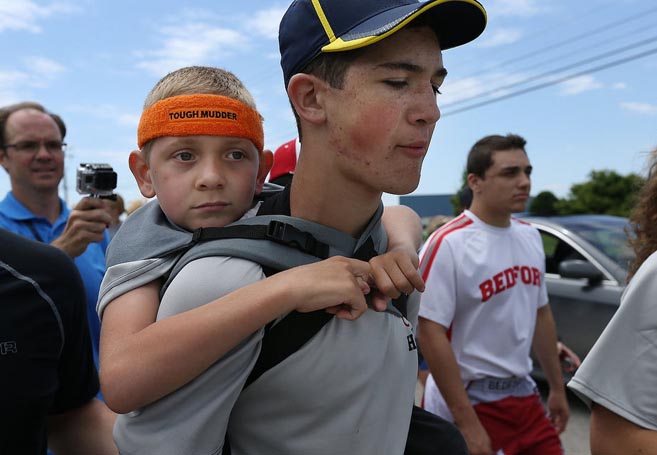