Henri Matisse (1869-1954) was a giant of 20th century art. His paintings forever altered the course of modern art, and even though he was bedridden in his final years after a series of illnesses, he was still fueled by an insatiable desire to create. In his own words, Matisse once said “artists should never be a prisoner of himself; prisoner of style, prisoner of reputation, prisoner of success.” And during his final years it was this belief that inspired Matisse to move beyond painting and towards paper cut-outs.

In a new exhibit at the MoMA entitled “Henri Matisse: The Cut-Outs” (until February 10, 2015), visitors are given an extraordinary glimpse at the work Matisse devoted his life to in the late 1940s. “Henri Matisse: The Cut-Outs is a groundbreaking reassessment of this important body of work. The largest and most extensive presentation of the cut-outs ever mounted, the exhibition includes approximately 100 cut-outs—borrowed from public and private collections around the globe—along with a selection of related drawings, prints, illustrated books, stained glass, and textiles. The last time New York audiences were treated to an in-depth look at the cut-outs was in 1961.”

In a feature profile for CBS This Morning above, correspondent Martha Teichner interviews Matisse’s grandson who, when asked what was inspiring his grandfather during that phase, replies: “He had discovered a new world and he was just going to explore it. I think he was just having the time of his life at this last period.” 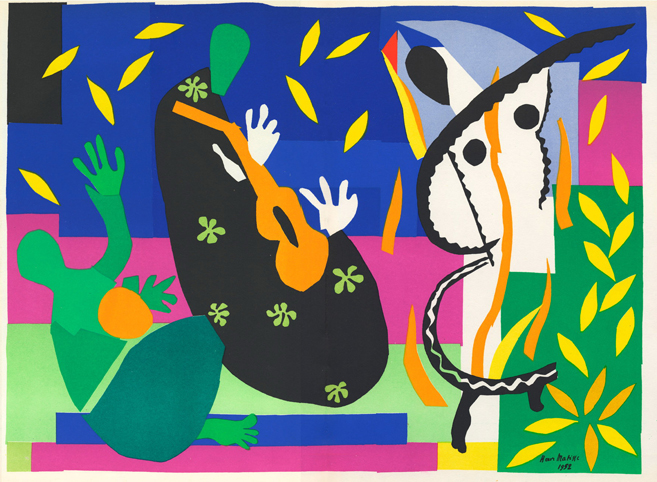