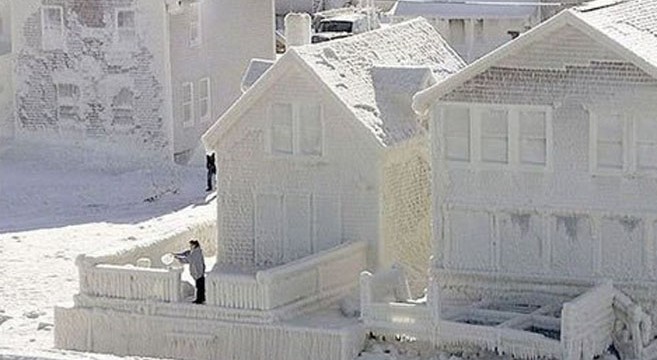 At this very moment Montrealers are living through what could easily be the basis of Stephen King’s next novel.  It’s so damn cold in Montreal that it’s caused an earthquake in the western part of the city on Monday.  Also known as a “frostquake” or a “cryoseism”, the phenomenon typically occurs in areas that are near large bodies of water.  The island of Montreal is surrounded by huge rivers, and the water-soaked ground below froze and cracked in a massive release of built up pressure.  Frostquakes usually happen during the very first major cold snap of the winter season — which is exactly what Montrealers are experiencing right now.

One resident described the scary event: “It sounded like a really big bang, like something fell on the floor in the house.  And then there was another loud bang like something fell on the roof.  We literally felt a huge shaking of the floor.”  So how cold is it exactly?  Over the past few days Montreal has experienced wind chills of -38C to -48C (i.e. -36F to -54F).  Adding insult to injury (or injury to insult in this case), the city was pummelled by freezing rain earlier in the week which turned the freshly plowed sidewalks into the slipperiest surfaces on Earth.  Emergency rooms were flooded with huge numbers of people suffering from broken hips, ankles, and other related injuries.

And no apocalyptic weather system would be complete without a dramatic sky show.  On Monday Montrealers nearly broke Facebook with countless photos of an ominous orange sky. Although exceptionally rare, the “orange sky” phenomenon happens around sunset when the orangish-yellow hues of the sunset are reflected off the ice crystals in the atmosphere.  In a Stephen King novel, however, the cause is supernatural.  One thing’s for sure — this is one horror story that Montrealers wish was over.

.
(Photo credit: The Return Of The Modern Philosopher)

Previous post:
Watch The Trailer For My Gorgeous & Talented Future Husband Sufjan Stevens’ Film Project “Round Up” Next Post:
Watch This Beautiful Tribute To The Cinematography, Themes & Motifs Of Terrence Malick