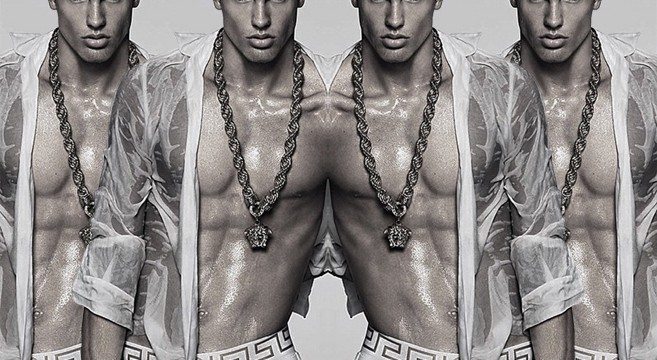 ☛ VERSACE releases a preview of their Men’s Summer 2015 campaign photographed by Mert & Marcus (OHLALAmag)
☛ Tennis match + Elton John + court-side chair.  Take a guess which 2 of these things fell over at the same time (Dlisted)
☛ Robbie Rogers and the L.A. Galaxy just won the MLS cup after an exciting 2-1 match against New England (Towleroad)
☛ The Solar Nano™ smartphone charging case gives your cellphone a perpetual source of energy from the sun (PSFK)
☛ Keanu Reeves looking sexy as ever in Tribeca, THR announces he will be major part of TIFF Festival in 2015 (Just Jared)
☛ The Berry compiles 39 of their hunkiest readers, but if I could only have two I’d gladly choose #12 and #22 (The Berry)
☛ There’s something so elegant about this pavilion “Bridge House” in the Netherlands designed by 123DV (Home Dezen)
☛ Everything you need to know about Snow Ghosts’ brand new track “Bowline” from their new LP A Wrecking (Stereogum)

Previous post:
Johnny Jewel Releases 33 Minutes Of Atmospheric Electronic Wallpaper “The Other Side Of Midnight” Next Post:
This Orgasmic Tribute To Cinema’s Love Affair With Space Just Gave Me Goosebumps