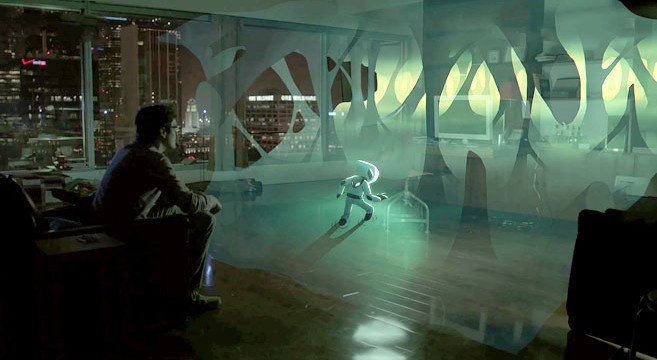 One of the most entertaining scenes in the Academy Award-winning film HER is when Joaquin Phoenix’s character is playing an impressively immersive video game in the comfort of his living room.  Now, thanks to the wizards at Microsoft Research, this video game is one major step closer to becoming a reality.  Known as the RoomAlive project, the developers use Xbox Kinect sensors and projectors to transform any room into an enormous interactive gaming playground.

Microsoft revealed in a statement: “Users can touch, shoot, stomp, dodge and steer projected content that seamlessly co-exists with their existing physical environment.  The basic building blocks of RoomAlive are projector-depth camera units, which can be combined through a scalable, distributed framework. The projector-depth camera units are individually auto-calibrating, self-localizing, and create a unified model of the room with no user intervention.”

You can watch the proof-of-concept footage of RoomAlive in action below, and learn more by visiting Engadget.com.  And if you haven’t yet seen Spike Jonze’s HER, you can watch the famous video game scene below as well.  To meet the real life designers who created the fictional video game for HER you can visit The Creators Project.