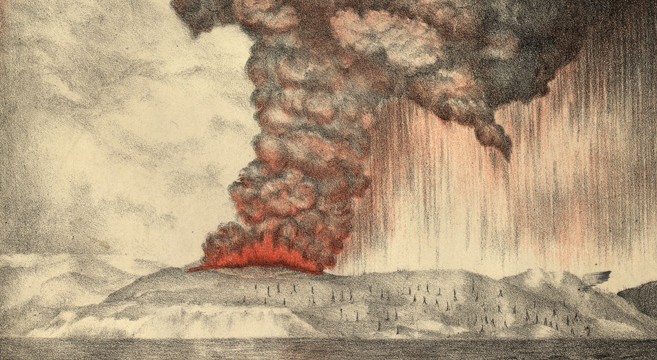 Sound That Kills: The Mindblowing Facts Behind The 1883 Krakatoa Eruption Heard 3,000 Miles Away

When the Krakatoa volcano in Indonesia (roughly 450 miles south of present-day Singapore) erupted in 1883, it unleashed the loudest sound ever recorded in human history.  It was so loud, in fact, it could be easily heard more than 3,000 miles away.  That’s roughly the same distance between New York and Paris, and it would have taken 4 hours for the sound to travel that far.  At 40 miles away it would have obliterated people’s eardrums.  At an astonishing 100 miles away from Krakatoa the sound would have reached a staggering 170db — loud enough to destroy 50% of homes, and loud enough to turn the air into fog as the sonic shock wave would have pulled all water vapor out of suspension.  By the time the sound of Krakatoa had faded away, it had travelled around the world a total of four times.  This same 170db was also recorded during the Saturn rocket launches of the Apollos missions.  With Krakatoa, 170db was recorded at 100 miles from the explosion, whereas with the Saturn rocket launches 170db was recorded 100 metres away.  A little further away at 500 metres, and the Saturn rocket would still cause severe damage — painfully violent shaking throughout your entire body, you would feel compressed as if you were underwater, you would lose vision, wouldn’t be able to breathe, your eardrums would explode, and the air temperature would drop 10-25 degrees F as the air would be violently stretched and moved.  But the real danger would occur directly under the Saturn rocket where sound levels reached 220db.  If NASA didn’t flood the launch pad with water to absorb the sound, 220db would be loud enough to melt concrete beneath, and set glass aflame a mile away.  Needless to say, without the rapid flooding of the launch pad with water, the 220db would have easily destroyed the rocket itself.  To get a sense of the shockwave emitted by a volcano check out this recent footage of a volcano explosion which captures the soundwave coming out of its cone.