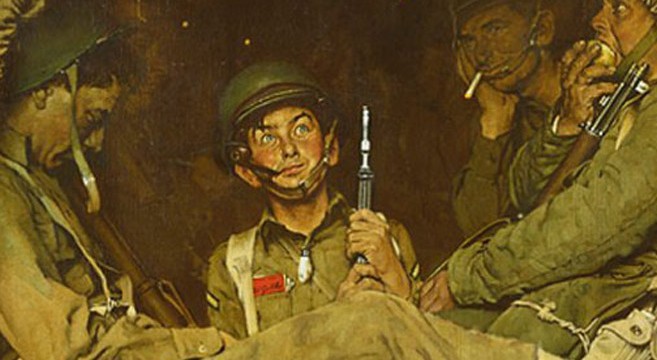 A previously unknown Norman Rockwell painting has been discovered in the town of Gardner, Massachusetts, just west of Boston.  The 1941 painting entitled “Willie Gillis in Convoy” was created for a Saturday Evening Post series, but never made the cover of the magazine.  Depicting a young WWII soldier in the back of a truck with his fellow comrades, the painting belonged to the principal of Gardner High School and hung in the office for nearly 50 years until it was put into storage in 2001.  Experts with the Rockwell Museum had no clue of the painting’s existence until now, and were bowled over when it was found.  The painting will go on the Sotheby’s auction block in New York on May 21st, and is expected to fetch a minimum of $2 million.  School officials hope the money will go towards a foundation set up to benefit the local students and surrounding schools.

Previous post:
Intelligent, Inventive & Wildly Funny “NEIGHBORS” With Rogen & Efron Wins ★★★★★ Reviews All Around Next Post:
Watch This Beautiful Tribute To “Blade Runner” With A Musical Score By Sigur Rós