If you’re looking for some belly laughs this weekend, there’s a growing critical consensus that you will definitely find some at a screening of Seth Rogen & Zac Efron‘s new ★★★★★ comedy NEIGHBORS.  The film tracks Rogen and Rose Byrne (Bridesmaids) who have the misfortune of living next to a brand new frat house.  A resulting neighbourhood turf war ensues, and what happens next has some critics betting their chips that NEIGHBORS is miles away the best damn studio comedy of 2014 so far.

Drew Taylor of The Playlist gives the film a seriously rare ★★★★★ rating for a studio comedy, writing: “[While] ‘NEIGHBORS’ doesn’t come close to capturing ‘Bridesmaids’ emotional honesty, it could have a chance of one-upping that film in the box office. Simply put, ‘NEIGHBORS’ is one of the funniest, most visually inventive studio comedies in recent memory.”  Scott Mendelson of Forbes is another huge champion of the film: ” ‘NEIGHBORS’ is overall a roaring success.  It is intelligent, insightful, and laugh-out-loud funny with no guilty aftertaste.  It manages to be a sounding board for a generation striving toward adulthood while everything in culture keeps telling you to never grow up.  It doesn’t lionize or condemn either life step, admitting the fun of being young as well as the rewards of admitting adulthood.”  And Chris Nashawaty of Entertainment Weekly raves: “Speaking in her native Aussie twang, Byrne shows that she’s a deadpan comic ace.  And thanks to her chemistry with Rogen, ‘NEIGHBORS’ proves that just because you grow up doesn’t mean you have to be a grown-up.  You can still be wild and crazy even as you’re yelling at the kids next door to get the hell off your lawn.”

NEIGHBORS was produced by Universal Pictures, and was made with an impressively economical budget of $18 million.  The film was directed by Nicholas Stoller, who also helmed Forgetting Sarah Marshall and Get Him To The Greek.  And forever a diehard fan of Amy Sedaris, it’s also worth noting that Stoller was a writer on Sedaris’s cult classic TV series Strangers With Candy (see below).  NEIGHBORS opens across North America this weekend.  Up next on my Seth-tuned comedy radar is A Million Ways To Die In The West, directed, starring, and written by Seth MacFarlane.  The film released its very first trailer yesterday (see below), and is set to open on May 30th. 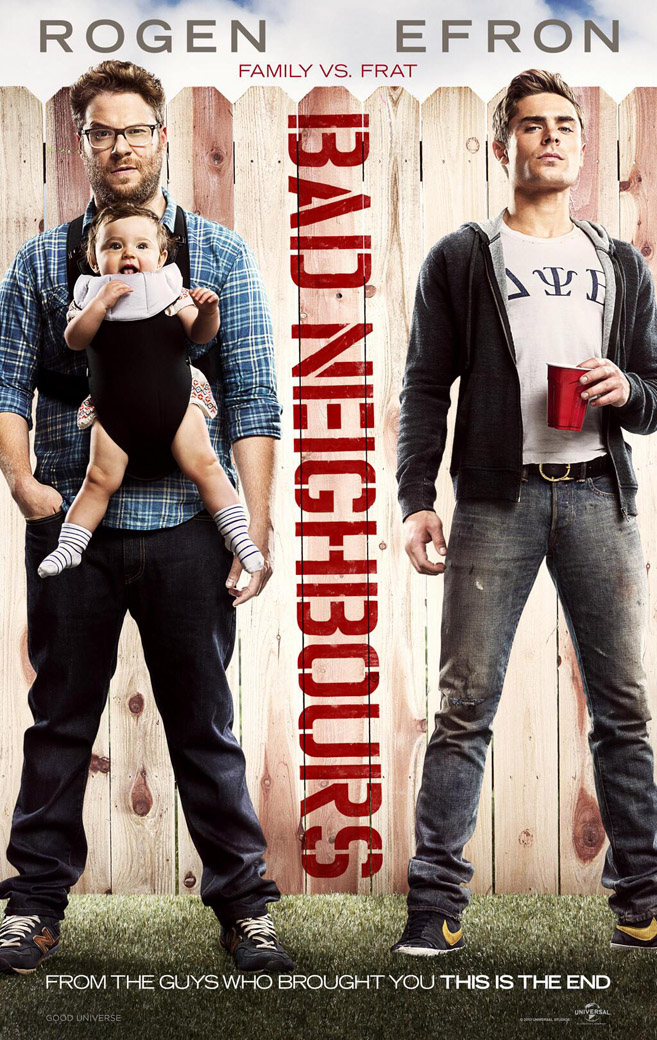 Previous post:
Watch “Repeat Pleasure”, The First In A New HOW TO DRESS WELL Trilogy Of Music Videos Next Post:
Previously Unknown Norman Rockwell Painting Discovered, Expected To Fetch Over $2 Million At Auction