Larry Harvey (born 1948) is the principal founder of the Burning Man festival, together with his friend Jerry James.  There is no way Harvey and James could have possibly know that a tiny summer solstice ritual they organized on June 21, 1986 — where Larry, James, and ten of their friends gathered on San Francisco’s Baker Beach to burn their artistic creation of an effigy of a man — would evolve into a global phenomenon.  Four years later the event grew to 800 people and was moved to Nevada’s Black Rock Desert, held during the Labor Day weekend.  Over the course of the next 23 years the Burning Man festival has grown exponentially to nearly 70,000 people.

In 1997, the six main organizers formed the management firm Black Rock City LLC with Larry Harvey chosen as the Executive Director, a position he still holds.  Harvey is also the president of the Black Rock Arts Foundation, a not-for-profit art grant foundation which promotes interactive art installations and collaborations in communities outside of Black Rock City.  He scripts and co-chair/curates the arts departments annual event theme and is the main spokesperson and political strategist for the organization.  He has been featured in such engagements as San Francisco’s Grace Cathedral “Radical Ritual” with the Very Reverend Alan Jones, the Oxford Student Union, Cooper Union in NYC, Harvard’s International Conference on Internet and Society as a panelist, the Walker Art Center in Minnesota and the San Francisco Commonwealth Club as well as many others.

Recently Larry Harvey appeared on Charlie Rose to discuss Burning Man’s evolution, where it is today, and where it’s headed for the future.  It’s a fascinating conversation, especially when Larry begins to discuss the global expansion strategy he and his team are working on.  To enter the world of Burning Man be sure to visit BurningMan.com and follow the festival on Facebook.  This year’s Burning Man is taking place from August 25th to September 1st, 2014, with an estimated budget of just over $12 million.

SEE ALSO: The Great Work of Your Life: Stephen Cope’s Extraordinary Guide For The Journey To Your True Calling 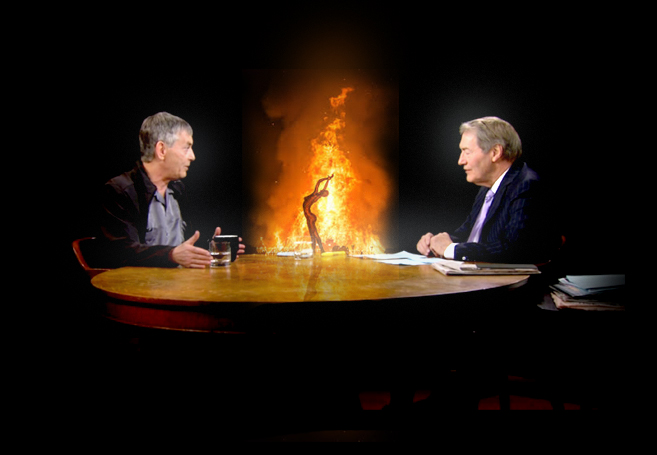 Previous post:
Billionaire Mark Cuban Only Has 13 Apps On His Phone, Watch Him Explain What They Are Next Post:
You’re Losing If You Don’t Grab THE WAR ON DRUGS’ New Album “Lost In The Dream”