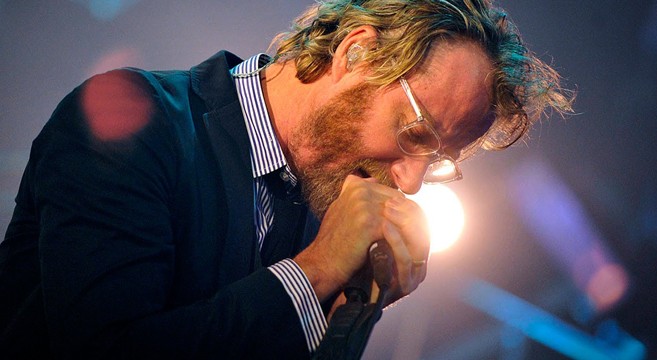 This past Friday night in London, BBC kicked off its very first 6 Music Festival.  The BBC signed Blur frontman Damon Albarn to open the festival on Friday night, but the audience was not impressed.  NME columnist Hazel Sheffield writes: “as the hour-long set drew on, the audience grew restless. ‘When’s he going to play Song 2?’ the man beside me asked.”  As Friday night continued, other acts such as Kelis drew the audience back into the spirit.  The next night, however, The National hit the stage to open the Saturday leg of the festival, and as Sheffield writes: “The National gave a masterclass in how to headline.  They flew over from America especially and picked songs that spanned their 15-year-old career.  Their frontman, Matt Berninger, has never found performing easy — he gulped wine from the bottle and knocked on his head with his fists when he got worked up.  But it didn’t stop him roaming the stage and standing on top of a speaker for ‘Fake Empire’ and striding out into the crowd during ‘Mr November’.  By the sixth song, ‘Afraid of Everyone’, grown men around me were in tears. At the end, Berninger took off his radio mic and conducted the crowd in an unplugged rendition of ‘Vanderlyle Crybaby Geeks’.  On the upturned faces of the fans you could see the rapture that comes from sharing a festival moment.”

SEE ALSO: The Long Road To The Top: How It Took THE NATIONAL 15 Years To Be Rock Gods

Previous post:
The WOW Files: The Baby Maserati “Alfieri” Sportster Debuts In Geneva To Dropped Jaws Next Post:
Mac DeMarco Gives Us An Early Taste Of Summer With His New Single “Brother”