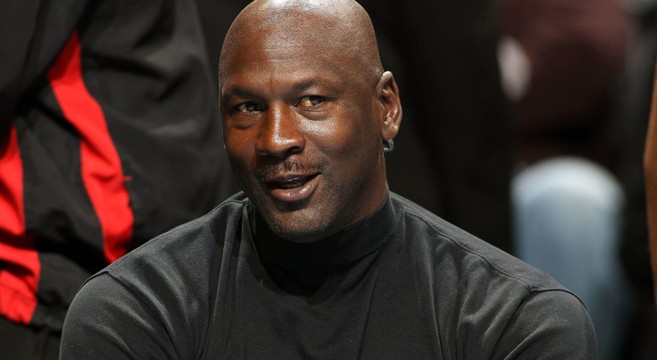 It’s been more than 10 years since Michael Jordan sported an NBA uniform, but that hasn’t stopped #23 from raking in a huge amount of cash.  Michael Jordan’s wealth has grown significantly since his retirement, increasing even more a few days ago when Nike recently released the Air Jordan 10 “Powder Blue” retro sneaker.  First-day sales for the shoe totaled a whopping $35 million.  To put this in perspective, in the twelve months of 2013 Adidas only sold $40 million worth of shoes from its superstar Derrick Rose.  The reigning king of active NBA players is LeBron James whose Nike shoes raked in $300 million in sales for 2013 — but that’s peanuts compared to Michael Jordan’s $2.25 billion in retail basketball sales for all of last year.

Thanks largely to his lucrative endorsement deal with Nike, Jordan took home an impressive $90 million in 2013, easily eclipsing the earnings of all other current or retired professional athletes.  The 2013 revenue marks a peak in Jordan’s immensely successful financial life, topping his previous record of $80 million which was set in his final 1997-98 season with the Bulls.

The Jordan Brand also raked in more cash beyond its $2.25 billion in retail basketball sales — Jordan also added an extra $450 million from other business ventures for a total of $2.7 billion in revenue.  Michael Jordan is Nike’s highest earning superstar, contributing more than $2 billion of revenue to Nike each year (Nike’s sales topped $26 billion in 2013).  With Jordan getting a cut of every pair of shoes, piece of clothing, and other merchandise, his deal with Nike makes up $75 million of his $90 million 2013 revenue.  Nike’s market share of the basketball merchandising industry is beyond compare at 92%.  Adidas is in a very distant 2nd place with a 5.5% market share, and Reebok sits in 3rd place with a market share of 1.4%.

As a cultural icon, Michael Jordan also remains the dominant iconic athlete.  According to ESPN The Magazine’s music issue, Jordan’s name was referenced in 50 new songs in 2013, eclipsing Kobe Bryant who was mentioned 18 times, and LeBron James was was referenced 15 times in popular music.  Michael Jordan was also named in the ESPN Sports Poll as the most popular sports figure of the year.  Michael Jordan’s Q score (a metric which measures a celebrity’s popularity and awareness in the general public) has consistently ranked #1 since 1991.  Michael Jordan is also the king of sports social media, with a massive Facebook base of 25 million fans — light years ahead of any other athlete.

Michael Jordan’s net worth is estimated to be more than $750 million, and he is on track to join the world’s elite club of billionaires in a few short years.  Michael Jordan wore his first pair of Nike Air Jordans in his rookie year of 1984.  Because the shoes were red and black to match his Bulls’ jersey, and did not have any white which is a legal requirement by the NBA, Jordan was fined $5,000 for that game, and every game that followed in his career.  Nike covered the cost of each of these fines, and took advantage of the fines to create a new type of rebel-oriented marketing strategy.  In the first 1984 commercial to reference the situation, a Nike voiceover reads: “On September 15th, Nike created a revolutionary new basketball shoe. On October 18th, the NBA threw them out of the game. Fortunately, the NBA can’t stop you from wearing them.”  And the rest is history.