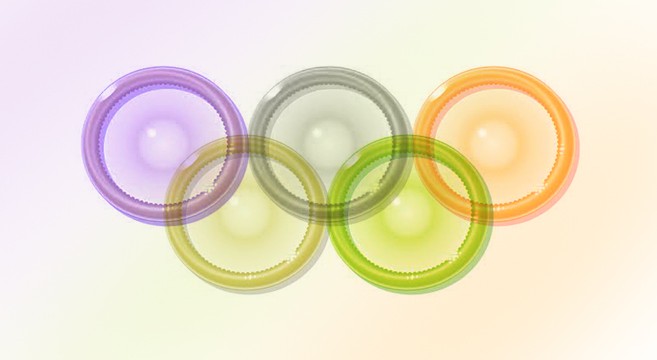 Sex, Love, And Sochi: Olympians Talk Openly About The Massive Amount Of Sex Happening At The Games

One Olympian who knows first-hand just how much sex takes place inside the micro-dorms of the athletes village is 32-year-old Jill Kintner of Washington state, who took home the bronze medal  BMX cycling in Beijing 2008.  Kintner tells ABC News: “There are thousands of athletes who compete at the Olympics.  Everyone is there to put their best foot forward, but not everyone is going to medal and be super busy.  Once the job is done, there are parties and celebrations all over the city hosted by sponsors or whoever to unwind a bit.  The stress and pressure of the Olympics is unparalleled, so I think it’s normal to want to have some fun after the job is done.”

Dr. Judy Kurianski is a sex therapist and clinical psychologist at Columbia University.  Kurianski says: “It’s like making the ingredients of a huge stew — a stew of sexual ingredients.  There is stress, which causes tension, and anxiety and energy, and a massive outpouring of chemicals in the body — adrenaline and endorphins.  It’s a powerful concoction of chemicals.”  But when Olympians of this calibre have fun — they really have fun.  Kurianski says these athletes are so intoxicated by the atmosphere, the energy, and the moment, they typically don’t “think about their conscience.”

Perhaps the most public admission of the Olympics’ behind-the-scenes raunchiness came from target shooter Josh Lakatos, who took home the silver medal in Atlanta.  In a feature story written for ESPN following the 2012 London Games, reporter Sam Alipour gathered confessions from 29 Olympians “on record about parties, sex, orgies and some things that would make even Dennis Rodman blush.”  Lakatos revealed in the interview his own personal experience of what he encountered: “I’ve never witnessed so much debauchery in my entire life,” he told ESPN.  He recounts the story of a “bacchanal-like party at an empty lodge” at the 2000 Sydney Olympics that lasted for eight solid days.

The Huffington Post reports the Olympic officials have distributed more than 100,000 condoms to the athletes at Sochi.  THP writes: “About 2,800 athletes are expected in Sochi for the upcoming Winter Games.  If the condoms were divided among the athletes alone (and not members of their training staff or Olympic officials), each person would get roughly 35 condoms, to be used over a period of about 16 days.”

American soccer star Hope Solo also revealed in Sam Alipour’s ESPN feature story, that she estimates “70 percent to 75 percent of Olympians” are having sex in the Village in their down time.  “There’s a lot of sex going on,” she tells ESPN.  Alipour also discovered there is so much sex taking place at the Olympics that 100,000 condoms is the new average for distribution.  The new number was reached when during the 2000 Sydney Games officials had to place an emergency order for 20,000 extra rubbers after the initial stock of 70,000 was used up.

100,000 Olympic condoms for athletes, however, is still not the most impressive number.  Organizers of the 2012 Olympics in London gave out 150,000 free condoms to the Games’ 10,800 athletes.  That number remains an Olympic record.

Previous post:
Inside The Godhead X-FILES: The Univ. Of Virginia Has A Prestigious Paranormal Lab Just Like X-MEN Next Post:
“I Am Love” Director Luca Guadagnino To Helm 1909 Thriller “A Reliable Wife” From Writer Of “SE7EN”