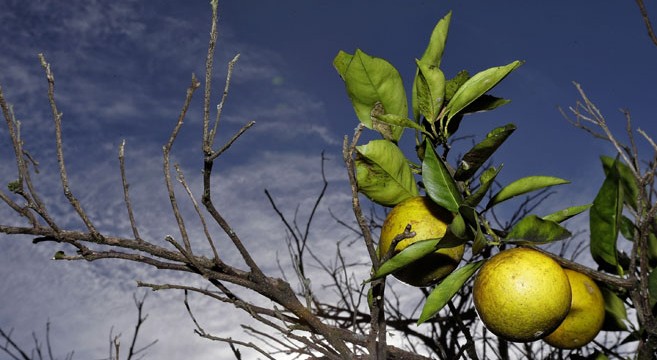 An incurable bacterial infection from China is quickly wiping out the entire supply of orange trees across the United States.  Likened to a contagious form of cancer, the disease is known as Huanglongbing, as well as “yellow dragon disease” and “citrus greening”.  Once the bacteria overtakes the orange trees, the roots of the tree first become deformed, then fruit prematurely falls from the limbs and rots, and the tree slowly dies.

The bacteria is spread by an invasive species of bug from China, called the Asian Citrus Psyllid.  The bug ingests the bacteria while eating the leaves of infected trees, then infects healthy trees when it feeds on new leaves.  The infection process has been compared to the the manner in which mosquitoes spread malaria.  More than 50% of the orange trees in Florida are infected, and scientists are quickly trying to find an antidote to stop the contagion from killing every single tree in the state, as well as the United States at-large.  More than $80 million dollars has been spent on research trying to develop a cure, but to no avail.  The U.S. Agriculture Department is currently exploring a “worst case scenario” emergency solution which would see the creation of a genetically-modified orange tree capable of withstanding the cancer-like bacteria, providing each orange tree with a genetic immunity.

The bacteria was first detected in the United States in Broward County, Florida, in 1998.  Two years later, the bacteria had spread to 31 other counties.  Farmers and industry experts warn the entire $9 billion U.S. orange juice industry has never been closer to collapse, and the threat of orange tree extinction is very real in Florida, as well as the rest of the world.  The cancer has been detected in Georgia, Louisiana, Texas, Arizona and California, as well as other countries including: Mexico, India, sub-Saharan Africa and Brazil.