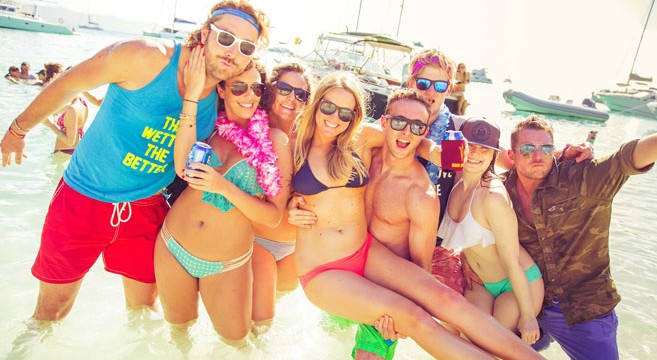 There is a mountain of research demonstrating that social networks have a strong tendency to cause depression from continually being overwhelmed by exposure to people whose lives are seemingly much more exciting.  Social scientists have taken for granted that this was all the result of an illusion — that people’s friends on Facebook, Twitter, and Instagram do not actually have richer, more exciting and happier lives.  It was all supposed to be just one great big falsity.  New contradictory research, however, is proving that people’s online networks of friends may very well be happier, richer, and more popular than they are.

The results were published by MIT Technological Review which explains the mathematics behind what is being termed the Generalized Friendship Paradox: “The paradox arises because numbers of friends people have are distributed in a way that follows a power law rather than an ordinary linear relationship.  So most people have a few friends while a small number of people have lots of friends.  It’s this second small group that causes the paradox.  People with lots of friends are more likely to number among your friends in the first place.  And when they do, they significantly raise the average number of friends that your friends have.  That’s the reason that, on average, your friends have more friends than you do.  But what of other characteristics, such as wealth and happiness, which are not represented by the network topology?  To study other types of network, [researchers] looked at two academic networks in which scientists are linked if they have co-authored a scientific paper together. Each scientist is a node in the network and the links arise between scientists who have been co-authors.  Sure enough, the paradox raises its head in this network too.  If you are a scientist, your co-authors will have more co-authors than you, as reflected in the network topology.  But curiously, they will also have more publications and more citations than you too.  [Reserchers] call this the ‘Generalized Friendship Paradox’ and go on to derive the mathematical conditions in which it occurs.  They say that when a paradox arises as a result of the way nodes are connected together, any other properties of these nodes demonstrate the same paradoxical nature, as long as they are correlated in certain way.  As it turns out, number of publications and citations meet this criteria.  And so too do wealth and happiness.  So the answer is yes: your friends probably are richer and happier than you are.  That has significant implications for the way people perceive themselves given that their friends will always seem happier, wealthier and more popular than they are.  And the problem is likely to be worse in networks where this is easier to see.  ‘This might be the reason why active online social networking service users are not happy,’ say [the researchers], referring to other research that has found higher levels of unhappiness among social network users.  So if you’re an active Facebook user feeling inadequate and unhappy because your friends seem to be doing better than you are, remember that almost everybody else on the network is in a similar position.”

In a feature article published last month in The New York Times entitled “The Agony Of Instagram”, writer Alex Williams explores the newly strange combination of jealousy and insecurity that is commonplace in the minds of millions of Instagram users.  You can read the full reasons why by visiting NYTimes.com.  The following stories are also in the same genre of interest:

SEE ALSO: Read The Wall Street Journal’s Revealing Psychoanalysis Of The Facebook ‘Like’ Button
SEE ALSO: An Infernal Machine Of Humanity: Jonathan Franzen Explains How The Web Is Destroying Culture
SEE ALSO: FEELguide Editorial: Is Facebook Destroying The Mystery, Miracle, And Adventure Of Being Alive?
SEE ALSO: The Spirituality Of Imperfection: How Life’s Truth Is Rooted In Storytelling, Mystery & The Unknown
SEE ALSO: Ghost In The Machine: The Powerful Questions Of Love & The Nature Of Reality In Spike Jonze’s “HER”

Previous post:
You Won’t Believe How Enormous Upworthy™ Is Until You See These Charts, Charlie Rose Talks To CEO Next Post:
U.S. Orange Trees Dying In Exponential Numbers From Contagious Cancer, Industry In Total Free Fall