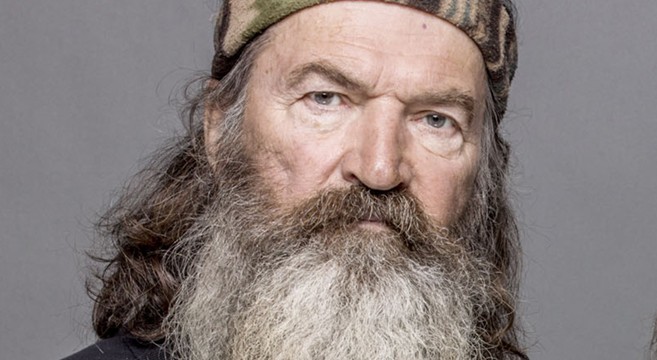 FEELguide Editorial: The “Duck Dynasty” Controversy And The Moral Reprehensibility Of Evangelicalism

The Episcopalian, Anglican, and Unitarian Churches are by far the most enlightened and sophisticated forms of Christianity, having woven evolutionary biology, gay marriage, the understanding that hell is not real, the laws of physics, and so much more lessons of intelligence into their faith.  This week, however, the Evangelical Church continues to demonstrate why their faith had its origins in the backwood swamplands of the uneducated south, when Duck Dynasty star Phil Robertson took aim at homosexuality in an interview with GQ.

Equating same-sex relationships to bestiality, he called homosexuality “not logical” — and was subsequently suspended from the reality show by A&E Networks.  Robertson’s suspension has sparked debate and controversy over the fundamentals of free speech, and whether or not someone can be fired simply for voicing their beliefs.  What is missing from the debate, however, is an understanding of the heavy price so many millions of people have to pay each day by living in a world of bigoted neophytes such as the patriarch of Duck Dynasty.

Evangelicalism would not survive 24 hours without its robust bacteria culture of fear-based, shame-based, and sin-based tenets — all of which are protected by the U.S. Constitution.  But what the Duck Dynasty scandal is also making painfully clear is how the U.S. Constitution, by default, also protects one’s right to be not only unfathomably stupid — but also morally reprehensible, and unconscionably blind to the devastating consequences that the Evangelical faith is having on the lives of LGBT men, women, and children around the world.

The #1 killer of LGBT youth in America is suicide, and if you trace the psychological trauma of these children back to its roots, you will find an Evangelical or a Catholic filling this child’s innocent mind with fear, anxiety, depression, and self-hate.  In the modern world this kind of faith is obscene, and as President Bill Clinton recently said so wisely, “Shame-based systems will not survive the 21st century.”  And neither will Duck Dynasty.

In the wake of the Sandy Hook tragedy, another kind of debate surfaced about gun control.  Sadly, the U.S. Constitution also protects one’s right to carry a weapon of such devastating power it is capable of killing a school of small children when that weapon falls in the wrong hands.  By comparison, the fundamentals of Evangelicalism are equally as deadly when seen through the lens of the countless gay souls who have taken their own lives as a result of this immoral strain of faith.

The problem with Evangelical fundamentalism are the fundamentals of Evangelicalism — protected, of course, by the First Amendment.  The real question is this: which constitution plays the most important role in guiding your moral compass — the U.S. Constitution, or your own personal constitution?  Whichever is more important to you, I certainly wouldn’t look for answers from a man who makes a living helping people trick ducks into thinking they want to fuck them.

Previous post:
The Mindblowing True Story Behind The Legendary Jazz Score To “A Charlie Brown Christmas” Next Post:
Top 16 Things You Didn’t Know About Band Aid’s 1984 Recording Of “Do They Know It’s Christmas?”