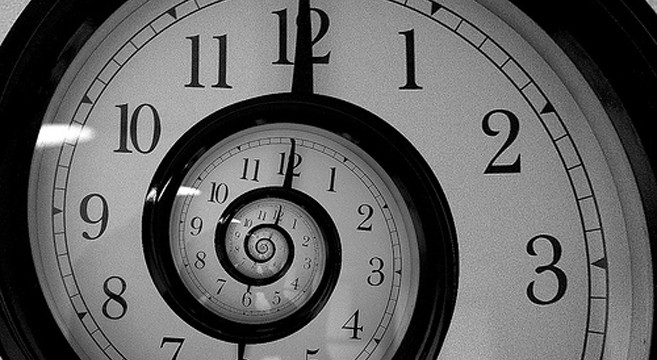 Entanglement Systems: How The Laws Of Physics Allow And Even Encourage Teleportation & Time Travel

The freakish nature of quantum physics is perhaps the most difficult to understand set of dynamics in the Universe.  Although we are just beginning to scratch at the lower slopes of this mysterious realm, physicists are discovering more and more mindblowing theories with each passing week.  The latest of which all but confirms that teleportation and time travel are not only possible — they are actually encouraged by the laws of physics.  Known as “entanglement systems”, this remarkable type of scenario occurs when two quantum systems have more information about each other than they can have classically: they “know” more about each other than they have any right to know.

As NOVA points out: “Entanglement gives rise to what Einstein called ‘spooky action at a distance’ (spukhafte Fernwirkung), where an action performed on one quantum system seems to have an instantaneous effect on an entangled system.”  NOVA adds: “The protocol works as follows. Alice wants to teleport an electron to Bob.  Suppose that in addition to the electron that Alice is going to teleport, Alice and Bob share a pair of entangled electrons.  Alice makes a measurement on the electron she wants to teleport, as well as her half of the entangled pair.  She sends the result of the measurement to Bob.  Now, even though Alice’s measurement is completely destructive and, taken on its own, reveals no information about the state of the electron that she wishes to teleport, the result of the measurement contains exactly the information that Bob needs to recreate the original electron from his half of the entangled pair.”

To learn how entanglement systems also encourage the ability to escape from black holes, as well as the ability to time travel, simply head over to NOVA.

Previous post:
If Francis And The Lights’ “Like A Dream” Doesn’t Get You Dancing Then Nothing Will Next Post:
The Cheerleader Effect: ‘Scientific American’ Explains Why Cheerleaders Always Appear To Be Attractive