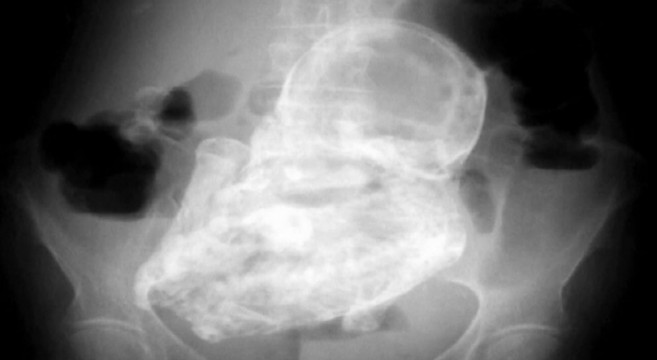 When an 82-year-old Columbian woman complained to her doctor about a pain in her pelvic region, even her wildest imagination couldn’t have predicted the cause.  It was only when the X-rays returned that her doctor discovered the woman was carrying a “stone” fetus inside of her (see image above).  The impossibly rare phenomenon occurs when a pregnancy forms in the abdomen rather than the uterus.  Known as a “lithopedion“, the fetus is turned to stone due to the body’s treating the fetus as if it was an infection — fighting it off by sheathing it in layers upon layers of calcium — in the case of this woman for approximately 40 years as ABC News reports.  Because stone babies are so well sealed with calcium, a woman can go an entire lifetime without ever realizing she’s carrying one.  Stone babies are even more rare in 2013 because modern medicine typically identifies any issues that would lead to a lithopedion baby forming in the first place.   Abdominal births occur approximately 1 in every 10,00 births, and stone babies are so rare only 300 have ever been documented in medical history.