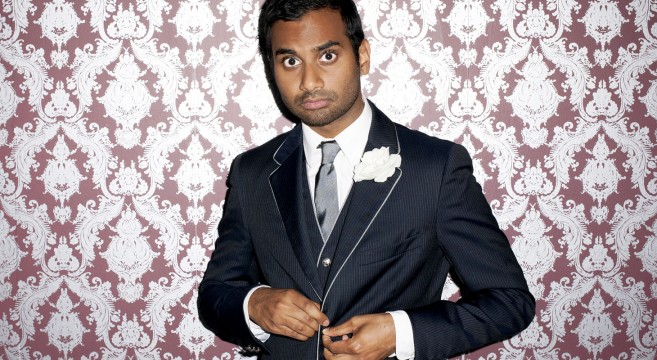 I almost choked on my dinner last night (NO JOKE) while I was watching comedian Aziz Ansari‘s appearance on Charlie Rose.  There to promote his new special Aziz Ansari: Buried Alive which is currently streaming on Netflix.  At 1 hour and 30 minutes, the show is getting terrific reviews, with The Washington Post writing: “Ansari turns out to be a gifted improvisor, interacting to great comic effect with audience members that he cajoles into revealing personal tales involving a marriage proposal and sexting.  The title ‘Buried Alive’ seems to refer to two things.  Most literally, it’s an allusion to repressed childhood memories.  But it also suggests the fears of a young man facing the avalanche of responsibilities that come with adulthood.”  The part in the Charlie Rose interview that had me in tears as I was choking on my half-chewed food was a clip from the special where Ansari demonstrates an exchange between a husband and wife in a world where the strange concept of marriage is first introduced — my belly still hurts.  You can see the hilarious clip in the YouTube video below, as well as at the 13:19 mark in the Charlie Rose interview.  You can watch Aziz Ansari: Buried Alive on Netflix.

Previous post:
Einstein And The “OK Plateau”: The Trick To Getting Unstuck & Skyrocketing Your Potential Next Post:
LINKguide (November 7, 2013)