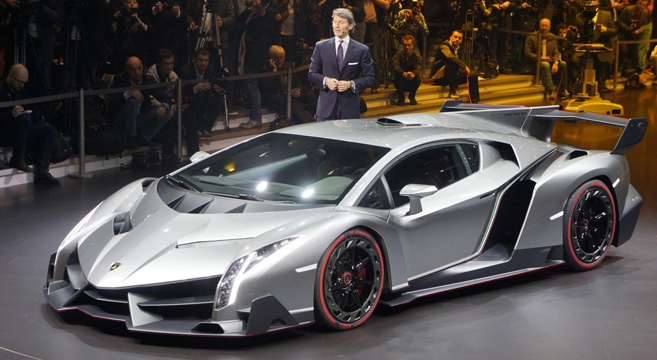 Ferruccio Lamborghini (1916-1993) was a wealthy Italian tractor maker, and early in his life he built what could be described as the “John Deere of Italy”.  One day while driving one of his many Ferraris he finally lost his patience with the car’s weak clutch, and decided to write a personal letter of complaint to Enzo Ferrari.  Mr. Ferrari famously replied with a letter of his own which read, “Stick to tractors, I’ll build the cars.”  In Italy, insult is the mother of invention, and this was the genesis of the Lamborghini empire.  Ferruccio Lamborghini wanted to teach Ferrari a powerful lesson, so he decided to build a brand new sports car which focused on lavish interiors, spectacular V12 engines, and a style unlike anything the world had ever seen before.

50 years later, the Lamborghini brand has become synonymous with wealth, fame, and undisputable quality.  Scott Pelley profiled the luxury car maker last night on 60 Minutes, taking a look back at the company’s past five decades, including the car’s iconic sound (you can hear a Lamborghini before long before you see it), as well as its iconic “uninterrupted line” design.  Not only does Pelley get behind the wheel of two Lamborghinis, he also explains how the company has successfully dodged bankruptcy since day one.  Mr. Lamborghini, as well as a string of the company’s succeeding owners, have each lost personal fortunes in keeping the business alive.  Lamborghini’s lackluster business model finally turned a page when Volkswagen purchased the company back in 1998 under its Audi brand, with Lamborghini posting impressive profits ever since 2006.

You can watch the story in full below.  And in case you haven’t yet seen Lamborghini’s mindblowing new Venevo™ model, introduced in March 2013, you can check it out in the video at the bottom of this post, and read the story behind it in the link just below.

SEE ALSO: The WOW Files: The Gods Of Lamborghini Unveil The Mindblowing $4 Million Venenos™ In Geneva

Previous post:
Scientists Discover Shape Differences Between Faces Of Gay And Straight Men Next Post:
Did You Know: The Backstory And Triptych Meaning Behind The Yoga Sound “OM”