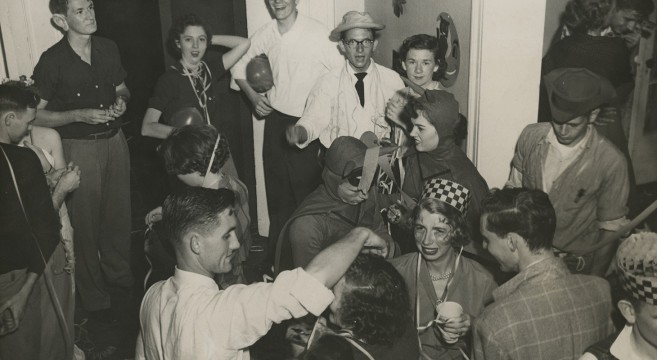 What’s The Best Way To Leave At A Party? Don’t Say Goodbye, Just Ghost It

If you’re like me, then you cringe at those awkward goodbye moments at the end of a party.  I’ve always tended to be the one who slips out the door when no one notices, completely skipping the goodbye altogether.  I often wondered if that was bad etiquette, but I no longer have to worry about that anymore.  In a terrific new piece written for Slate, author Seth Stevenson explains why skipping the “party goodbyes” is the best thing for everyone involved.  Stevenson writes: “Ghosting — a.k.a. the Irish goodbye, the French exit, and any number of other vaguely ethnophobic terms — refers to leaving a social gathering without saying your farewells.  One moment you’re at the bar, or the house party, or the Sunday morning wedding brunch.  The next moment you’re gone.  In the manner of a ghost.  ‘Where’d he go?’ your friends might wonder.  But — and this is key — they probably won’t even notice that you’ve left … These sorts of goodbyes inevitably devolve into awkward small talk that lasts too long and then peters out.  We vow vaguely to meet again, then linger for a moment, thinking of something else we might say before the whole exchange fizzles and we shuffle apart.  Repeat this several times, at a social outing delightfully filled with your acquaintances, and it starts to sap a not inconsiderable portion of that delight.”  You can read the full piece by visiting Slate.com.

Previous post:
Fossil Shows Dinosaurs Locked In A Fight Goes Up For Auction (But You Can’t Afford It) Next Post:
Ridley Scott’s Sequel To “PROMETHEUS” Just Passed A Very Exciting And Major Stage