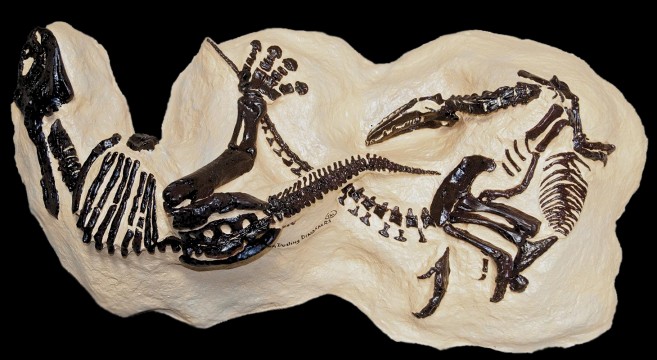 Discovered in 2006 on a private island in the Hell Creek Formation in Montana, this remarkable combo of fossils reveals two dinosaurs locked in an epic battle that led to their deaths, and preserved in stone for eternity.  The carnivore, known as a Nanotyrannus, has a cracked skull and 26 of its teeth which are lodged in the body of its prey, a herbivore Triceratops-like dinosaur.  It’s anyone’s guess how this fight played itself out millions of years ago, but the fossil itself will inspire a new fight once the $9 million treasure is auctioned off at Bonhams in New York City.  The price tag will go down as one of the most expensive fossils of all time.  The $9 million is so pricey, in fact, that no museum can afford it, hence the private sale.  But there is much more to the fossil’s significance than the story of the fight — the bones may hold the keys to definitive evidence about whether or not the Nanotyrannus is actually a brand new species of dinosaur or just another young T. Rex.

Previous post:
The RuPaul Interview: At 62, Elvira Is Still The #1 Most Fabulous Mistress Of The Dark Next Post:
What’s The Best Way To Leave At A Party? Don’t Say Goodbye, Just Ghost It