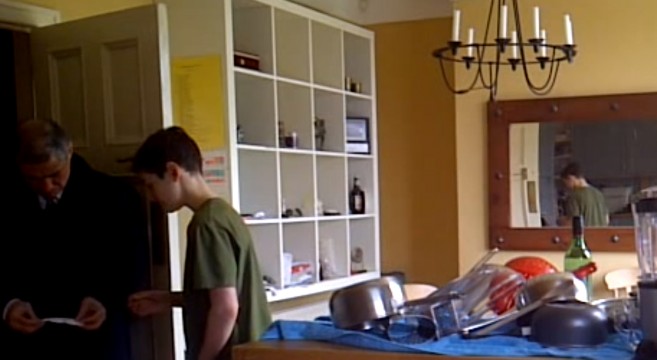 Farnoosh and Aria Shahrokhshahi, the father-son duo that recently went viral for a taped reaction to Aria’s passing math grade, sat down for a Skype interview with the hosts of the TODAY show this morning to explain that touching moment seven months ago.  Aria, who is now in college, says he wanted to share “one of the happiest moments in my life with the world.”  A British father whose emotional reaction to his son’s passing grade in math has become a viral video is not surprised that the spontaneous joy between a father and son has resonated with so many people.  “I’m overwhelmed by the generosity and the kindness of everyone who has communicated with us,’’ Farnoosh Shahrokhshahi told TODAY in an interview with his son on Wednesday.  “It’s absolutely wonderful, absolutely moving.  I have to say that at one point I did not find it surprising at all because the vast majority of people are lovely.  They appreciate love wherever they see it.’’  Shahrokhshahi’s son, Aria, had received an “F’’ in math (or “maths,” as the British term it) for a marking period in September 2012, but rose his grade to a passing “C’’ by January of this year.  He was in tears after his teacher told him of his improved grade and decided to surprise his father with the news while capturing his reaction on video.  You can watch their interview with TODAY below, as well as the original YouTube video that is going viral worldwide.