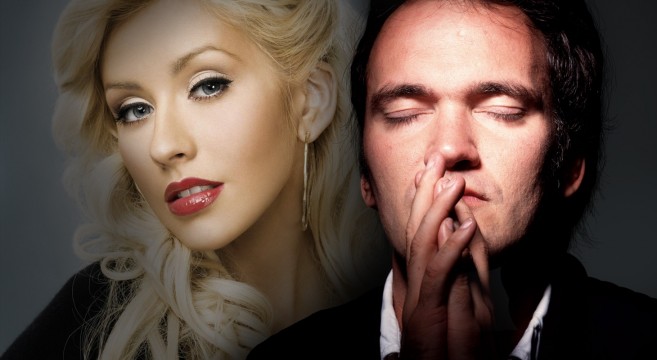 Having completed her recent world tour Christina Aguilera is back safe and sound in her red leather coaching chair on the smash hit reality series The Voice.  Looking and sounding better than ever, the superstar stunned viewers with her svelte new figure after months on the road.  But it’s not only fans of The Voice who’ve taken notice.  Director Quentin Tarantino is reportedly infatuated with the singer ever since her return to the show, and is hitting her up with an avalanche of work opportunities.

4 Music writes: “The film director is long known to have considered Uma Thurman, who starred in his Kill Bill franchise, as his muse.  It seems he is now ready to move on and is adamant Christina is his biggest source of inspiration.  He apparently became particularly interested in her after she showed off her slimmer frame a few months ago.  ‘He’s been hitting her up with e-mails and scripts for movies, plus calling her loads and even writing her letters,’ [says an insider close to Aguilera].  The 32-year-old singer is no stranger to the big screen having starred alongside Cher in 2010’s ‘Burlesque’.  Although she would love to revisit movies, she is said to be questioning Quentin’s motives.  ‘Christina doesn’t want to offend him and she’s open to more acting opportunities.  But she’s worried that he may have a crush on her, so at this point it’s gotten kind of creepy,’ the source explained.  Top of Christina’s list of concerns is said to be the way the film director wants to discuss future projects.  Quentin doesn’t seem to care.  He has all these projects he wants to discuss with her, but when she asks him to come to her office, he suggests dinner.  Christina would love to be Tarantino’s muse, but she is not going to bother if it comes with strings attached,’ the insider explained.”

Christina Aguilera’s net worth is estimated to be well over $100 million.  Her salary for season 5 of The Voice, which premiered on September 23, 2013, is $12.5 million.  According to sources Aguilera is pulling down more than $225,000 per hour/episode, while the other coaches — Adam Levine, Blake Shelton and Cee-Lo Green — are getting about $75,000 each.  On October 3, 2012 Aguilera received the 11th annual George McGovern Leadership Award from then-Secretary of State Hillary Clinton at a ceremony held at the U.S. Department of State.  Aguilera was one of the honorees at the event, thanks to her work as an Ambassador Against Hunger for the United Nations World Food Program.  During her tenure as the global spokeswoman for the Yum! Brands World Hunger Relief Campaign, Aguilera has helped raise nearly $115 million for the organization.