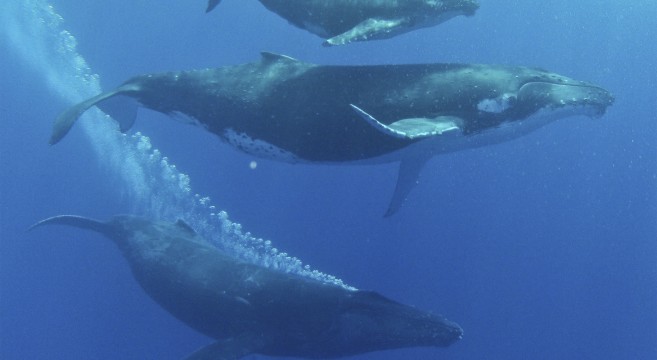 60 Minutes‘ Scott Pelley aired a brilliant report on the amazing success story of the humpback whale and its return from the brink of extinction.  The first part of the story has Pelley in the middle of an undisclosed part of an unknown ocean where he catches up with American Paul Watson, one of the founders of Greenpeace, as well as the Sea Shepherd Conservation Society, an international non-profit, marine wildlife conservation organization, whose mission it is to end the destruction of habitat and slaughter of wildlife in the world’s oceans in order to conserve and protect ecosystems and species.  Sea Shepherd’s “direct action” tactics often leads them into conflict with the few remaining whaling vessels that remain in the world — mostly in Japan.  Watson’s actions have made it almost impossible for his to return to land due to the number of arrest warrants that have been issued for him.  So Pelley rendezvoused with Watson at a top secret location in the safety of international waters for their conversation.  The second half of the report finds Pelley and his crew in the warm waters of the South Pacific near the Cook Islands — at a major humpback whale breeding spot called the Rarotonga — where they catch up with Nan Hauser.  Hauser is an American marine biologist who intended to come to Rarotonga for one month of research but that was 16 years ago.  Now her home and lab are on the side of the volcano and she spends her days eye to eye with her subjects to unlock their mysterious secrets.