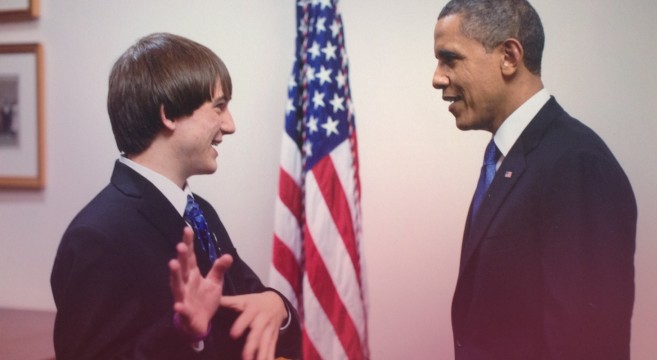 Jack Andraka was 15-years-old when he shocked the worldwide medical community when he developed a test that proved successful in detecting pancreatic cancer in its earliest stages, one of the most difficult cancers to diagnose.  His discovery won him the prestigious $100,000 Intel International Science Fair prize when he beat out 1,500 competitors, gaining him worldwide attention for his remarkable breakthrough.  An early detection test for pancreatic still does not exist, so if Andraka’s test passes rigorous clinical trials, it will become the world’s first, and end up saving countless lives.  Morley Safer of 60 Minutes recently caught up with Andraka and profiled his remarkable life story.  Safer takes us inside Andraka’s home where we meet his parents and his brother with whom he shares a science lab/playhouse in their basement.  We also learn how Jack has come to be very close with President Obama, how he’s travelled the world speaking to elite audiences of medical researchers, how he perceives knowledge as being irrelevant if you don’t have creativity to bring it to life, as well as Jack’s current collaboration with a group of other young scientists as they try to win the $10 million Tricorder X Prize — a competition which asks entrants to create a handheld mobile platform that can diagnose 15 diseases across 30 patients in just three days (akin to the Tricorder device featured in Star Trek).  You can watch Jack’s 60 Minutes profile in full below, and check out his TED Talk as well.