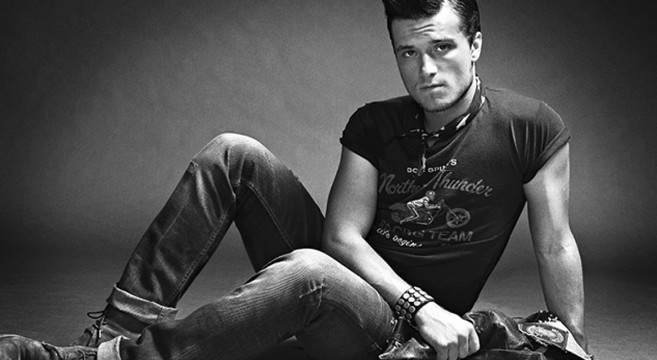 As our world’s relationship with the nuances and complexities of human sexuality continues to evolve, we have thankfully arrived at a place where most of us realize that there is no such thing as being 100% straight or 100% gay.  Human sexuality is very much like a spectrum, with each of us falling somewhere within those infinite combinations of colors.  In recent years as more and more high profile public figures proudly announce their place on this spectrum in full self confidence and without fear of judgement, it has helped our world arrive much more quickly to this beautiful new found place of tolerance.  In the coming years, we will see more and more of these public figures (and loved ones in our own families) take pride in their individual location on this spectrum of sexuality — a location which is by no means written in stone, is by no means welded to the 100% extremities, and naturally has the ability to change and evolve as we each move through our own lives.

Josh Hutcherson, who stars as Peeta in The Hunger Games, is one of these public figures who let it be known in a recent interview with OUT Magazine that he is “mostly straight”, a term that we will be seeing more and more of in conversations about sexuality.  “Mostly gay”, as well, will also be appearing more often in public discourse.  Shana Naomi Krochmal of OUT writes: “We’ve barely started lunch, and I’m nowhere near my usual open-ended sexuality question, when Josh Hutcherson offers this: ‘I would probably list myself as mostly straight.’  That ‘mostly’ is what makes Hutcherson winningly uninhibited, but also typical of his generation.  New research published in ‘The New York Times’ in 2010 shows that an increasing number of guys his age identify as ‘mostly straight,’ and Hutcherson’s ease in embracing ambiguity over neat and secure boxes speaks to his self-assurance.  ‘Maybe I could say right now I’m 100% straight,’ he says.  ‘But who knows? In a fucking year, I could meet a guy and be like, Whoa, I’m attracted to this person.’  Hutcherson grew up in Union, Kentucky, a small town close to the Ohio border, and his slouchy, chill California vibe is still tinged with a soft Southern accent.  Everything he says sounds easygoing.   ‘I’ve met guys all the time that I’m like, Damn, that’s a good-looking guy, you know?’ he says.  ‘I’ve never been, like, Oh, I want to kiss that guy.  I really love women.  But I think defining yourself as 100% anything is kind of near-sighted and close-minded.'”

Hutcherson has been an ally to the LGBT community for a while now.  As Towleroad points out: “He co-founded the Straight but Not Narrow campaign which encourages other heterosexual youngsters to stand up in support of their gay peers.”  You can read the entire OUT interview with Josh, including his Hunger Games role, his family’s gay legacy, and more about Straight But Not Narrow at OUT.com.  And to read The New York Times article on how more and more young men in their twenties are defining themselves as “mostly straight” be sure to visit NYTimes.com.