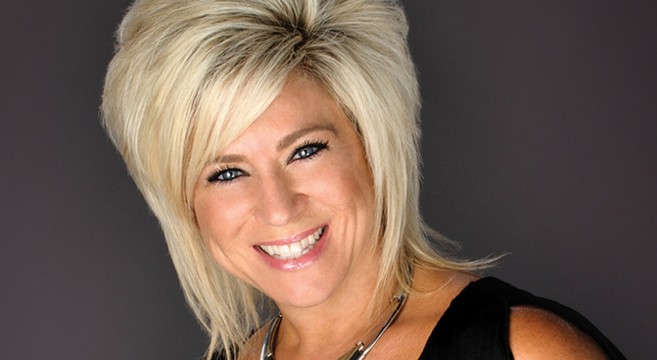 Theresa Caputo has become America’s most famous medium ever since her show Long Island Medium premiered on TLC on September 25, 2011.  Last weekend the show premiered its brand new season on Sunday, October 6th, and the record books had to be re-written as soon as the impressive Nielsen ratings began to roll in.  The premiere episode ranked #1 at 9pm in all cable among women 25-54; it delivered 2.6 million viewers (beating Lifetime, Bravo, and E!); and the show ranked as TLC’s best social media night in the network’s history, ranking#1 among all of television excluding sports.  The show’s 2.6 million viewers put it above its closest competition: Lifetime’s new Witches of East End (1.9 million), E!’s episode of Keeping Up With The Kardashians (2.3 million), and Bravo’s reunion special of New Housewives of New Jersey (2.5 million).  The main reason the LIM premiere was such a huge social media event was the fact that the show was giving away all-expenses-paid trips to lucky viewers who will receive a reading from Caputo in person.  Deadline Hollywood writes: “The show’s daytime walk-up marathon, and primetime mid-season debut nabbed 12 of the Top 15 spots across all TV episodes for the day (Source: SocialGuide).  Generating more than one million Tweets throughout the day, ‘Long Island Medium’ drove TLC’s most social night ever  — about 165,000 fans of Caputo tweeting while watching the show.  The #LongIslandMedium hashtag was used more than 880,000 times — trending on Twitter in the United States along with eight other terms and hashtags.”  Theresa Caputo’s brand new book, There’s More To Life Than This, also made the New York Times Bestseller List this week.

Previous post:
Will Ferrell’s Crazy Brilliant New Mini-Series “The Spoils Of Babylon” Airing On IFC In January Next Post:
Josh Hutcherson Tells OUT He’s “Mostly Straight” & Why There’s No Such Thing As 100% Gay Or Straight